5 Hot Wheels RLC Exclusive Chevy 454 SS Was an Instant Hit, All Sold Out in 10 Minutes
Car video reviews:
Up Next

1956 Chevrolet 210 Spent Decades in a Barn, Hides Mysterious V8 Under the Hood

Earlier today, I was out doing some grocery shopping, and I just had to visit the diecast aisle before leaving the store. I bumped into a father and son moment, and they were each picking out their favorite models to take back home. "It's time to stop; that's the last one; otherwise, mom will kill us both" He confessed that his wife does support his passion for diecast cars, but they did agree on a certain limit of vehicles per each store visit.

Respecting that limit isn't always easy. When new products hit the shelves, collectors tend to go overboard, and they'll buy dozens of cars in one go. And if you're serious about this hobby, you can't just buy a single vehicle from a particular series.

That means you'd have an incomplete collection. If there are five cars in that series, you'll feel the urge to get them all. So here's some good and bad news at the same time. The new Hot Wheels Replica Entertainment set is here.

As you can tell from the name, this series is dedicated to showcasing some of the most emblematic vehicles seen in movies, games, and TV Shows. When it was first introduced in 2013, Mattel had named it Retro Entertainment. For 2014, 2015, and 2016, it was rebranded to Hot Wheels Entertainment.

Finally, the current name was adopted in 2017. Some of the iconic vehicles that have been featured in the series over the years are the Classic TV Series Batmobile, K.I.T.T., the Ghostbusters Ecto-1, the Mystery Machine, and the A-Team van.

Right now, we're looking at Mix 4 for 2022. Surprisingly, there are only three cars in this set out of a total of five items. But let's have a look at each one of them. It feels exciting to see the Mitsubishi Lancer Evolution VI once again. This was just introduced in 2021 as part of the Car Culture: Modern Classics set.

This time it's here to promote the Forza Horizon 5 videogame, and some collectors will say that this white version isn't as good as the Metalflake Blue one. The only question right now is: when will this casting be introduced as a Mainline vehicle?

Those of you who have played Cyberpunk 2077 will instantly recognize Johnny Silverhand's Porsche 911 Turbo. But you don't necessarily have to be part of that target group to like this car.

Chances are that the vast majority of Hot Wheels collectors are going to do whatever they can to get their hands on this model, as Porsches are quite popular inside the community. What's even cooler about this is that it's a brand new casting, so expect to see more of it in the upcoming series.

It was just a while ago that we saw a series dedicated to the Jurassic World movie, and here we are again. The Mercedes-Benz Unimog U 1300 L never fails to deliver, and this time it features "Mobile Veterinary Unit" decals on the sides. The T-Rex version was better from our perspective, but some of you might like this version better.

The Kawasaki motorcycles featured in the Top Gun movies were pretty iconic, but the F-14 Tomcat was one step ahead. Hot Wheels don't usually release fighter jet replicas, but this time Maverick's ride made it through.

The final item in this series is Deadpool's scooter. It's not the first time we get to see this in a Hot Wheels set. But at least it looks better than the 2021 edition. If you've seen the movie, you'll appreciate the "Tactical Chimi Delivery" decal on the side.

Two-wheelers are never that popular in the Hot Wheels community, but this one might get some traction based on the movie's success. If you've got $33 to spare, you can already buy these items on eBay! 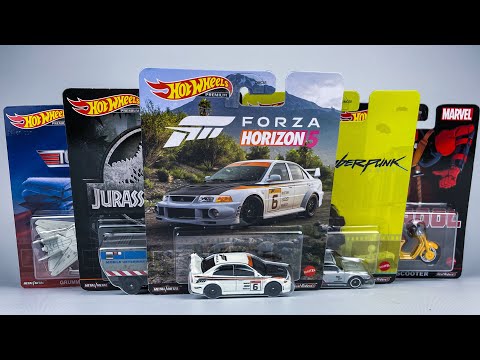