2 This May Be the World's Most Hated Civic Project Car, and It Is Getting Rebuilt

5 Honda Civic Has a Horsesh** Grille, Looks Like a Bugatti Veyron if You Close Your Eyes
Up Next

Dragos Chitulescu
There's no denying the fact that Hot Wheels collectors are big fans of Japanese cars. So if you can't afford an all-JDM, 10-car garage, resorting to their miniature versions will feel like a sweet alternative. Over the past half a century, Mattel has released plenty of Japanese replica cars. It can be quite a challenge to think of a model that doesn't have a scale Hot Wheels representation.
26 photos

Can you remember a time when you were a Civic enthusiast? Perhaps some of you still are. And that's perfectly sensible. You could almost say that the Civic - or at least the sportier versions – encompasses all three famous attributes: cheap, fast, and reliable.

Of course, everything is relative. People will define "fast" differently, based on their previous experience. And the same goes for fast and reliable. Still, if you're an automotive enthusiast and a three-rotor RX-7 is way out of reach, a 1992 Honda Civic EG6 might just quench your thirst for speed.

The new Hot Wheels Honda Civic series is made up of five different cars. Seeing that the model was launched back in 1972, you can now go to a Honda dealership and get your hands on a brand new, eleventh-generation version of it.

So it's impossible to fully represent its evolution by using just five cars. It has been 8 years since Mattel hasn't offered collectors an EP3 Type R for instance. Looking for a replica of the FD2 Type R will only leave you disappointed. But that may change in the next couple of years.

Until then, we'll have to do with this five-car set instead. The 1990 Civic EF is the first in line to be released from its plastic prison. Based on the SiR version of the model, this casting was first released in 2014. This means we're now looking at its 10th iteration and the first one after a three-year hiatus.

The 1992 Honda Civic EG has only been around since 2020 when it was first launched as part of the "Fast & Furious: Fast Tuners" series. If you include the Custom version that's part of the Mainline series, this is the fifth-ever Hot Wheels, 1/64-scale, Civic EG to hit the stores.

The Honda Civic Si is the only coupe featured in this new series, and for many of us, this used to be a dream car at one point. And if you need something to back that statement up, Mattel first released this version of the Civic Si back in 2001!

That makes it one of the most popular Hot Wheels Honda Civic models of all time! The red and white color combo works great, and you can't help but get the urge to play a quick session of Need for Speed Underground just by looking at it.

Up next, we get to see a new livery for the first turbocharged Type R in history, the 2016 FK2. This was first released in 2017, as part of the "Then and Now" series. It's now sporting "Civic" and "Yokohama" decals, as opposed to the usual "Bisimoto" ones we were used to seeing before.

The last car in the series is the 2018 Civic Type R, codename FK8. This casting was designed by Ryu Asada. And if you were lucky enough last year, you might have an STH version of it at home. 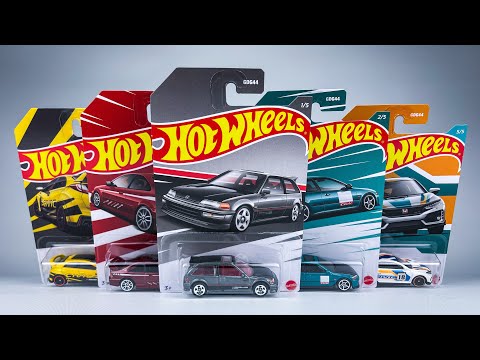