2 2019 Hot Wheels Super Treasure Hunt Part 1: A Look at the First Five Cars of the Year

Dragos Chitulescu
I think I might have accidentally infected a few of my friends with the Hot Wheels virus. While they already had a few cars of their own, recently, they've been spending more time hunting for their favorite castings in stores all around town. And earlier today, one of them even bought his first premium model: the Fast & Furious Nissan Skyline R33 GT-R that Leon drove in the first movie.
16 photos

FAO Schwarz is one of the oldest toy stores in the USA, and this year, the company is celebrating its 160th anniversary. And throughout recent history, there have been quite a few special Hot Wheels/FAO Schwarz collections going around.

You'll find plenty of them on eBay, some of which will set you back more than $400. That particular edition was limited to just 4,000 sets, so that's why you can't get it as cheap as you might have expected. Finding all the FAO Schwarz Hot Wheels cars ever made might take you a while, and this newest set could be a good starting point for that journey.

There are eight cars inside, and you can get all of them for about $60, depending on your source. They're all painted Metalflake Gold, and that might distract you from the fact that this is not a premium set. While it's not likely that this is a limited edition collectible, its value will probably still hold up over time if you keep it in mint condition.

The Aston Martin 1963 DB5 is the first casting you'll see here and it features Wire Spoke wheels. Fraser Campbell designed this for its introduction in 2014 when it was painted British Racing Green. This new Gold version is the 16th iteration so far and also the only one to have been used in 2022. There are quite a few premium versions to look for, and it comes as no surprise that most of them are connected to the James Bond franchise.

The Bone Shaker has been around for slightly longer, as it was first introduced in 2006. Most collectors will tell you that this is one of the most iconic Hot Wheels castings ever made, and there are about 100 variations of it released in less than 20 years of existence. A few of them are quite rare, including the RLC models and the Super Treasure Hunt ones. And we've found a seller on eBay that's willing to part with all of his 85 Bone Shakers for $3,500!

Next up on our list, it's the Land Rover Defender 90. The BAJA5 wheels are probably some of the most decent base-level ones that Mattel is using these days. This has been the go-to solution for the company for all mainline Defender 90s ever since it was introduced in 2020. The most interesting version has got to be the one that was featured in Mix 2 of the Hot Wheels Boulevard series earlier this year, which you can still find for pocket change these days.

If you've been reading our Super Treasure Hunt coverage lately, you'll instantly recognize the Volkswagen T2 Pickup casting. Mattel gave us a Spectraflame Maroon version of it back in 2019, and that's still the only iteration of this casting to have used Real Riders wheels so far.

Some of the younger Hot Wheels enthusiasts might not be all that excited to see the Twin Mill casting in the FAO Schwarz set, but that should teach them a history lesson.

This design has been around since 1969, and it also happens to be one of the most popular ones ever released by the diecast manufacturer. It was even featured in the NFT Garage Series 1 that came along last year, and there are so many iterations of it that it will take quite a bit of time, effort, and resources to get them all.

With all these iconic vehicles included in the set, it would have been strange not to see a Porsche casting inside. Both Ryu Asada and Jun Imai worked on this project, and even though it was just introduced in 2018, there are nine versions of it out already. The 2021 Collector Edition model was particularly interesting in Spectraflame Aqua Green with black Mini Classic 4-Spoke Real Rider wheels.

You might have noticed that there were no Japanese cars included on this list so far, but the people at Mattel are always careful to include a diverse selection of cars to cater to multiple collectors.

So enter the Nissan Skyline H/T 2000 GT-X, which JDM enthusiasts will refer to as the "Hakosuka," which means Boxy Skyline in Japanese. The casting is now almost 12 years old, and we've seen 17 iterations of it without considering the FAO Schwarz release. Look out for the Super Treasure Hunt that came in Spectraflame Seafoam Green, as some of those can cost as much as $180.

We've saved what's best for last. The 1967 Camaro is a brand new casting for Hot Wheels, even though it looks quite similar to the '68 COPO Camaro. Even so, collectors will be eager to get this, so you could say that this is a nice little incentive to help drive more sales for this gold-like set. 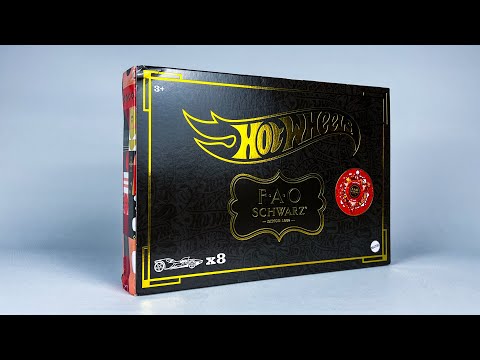