1 Hot Wheels Celebrates the Ford Mustang With a New 5-Pack, There Are More Surprises Still

5 1973 Toyota Celica Is a Chevrolet at Heart, Wins the Hot Wheels Legends Tour in Canada
Car video reviews:
Up Next

It's here. It's finally here. Case P of the 2022 Hot Wheels mainline series has finally been revealed, and we were beginning to wonder why it's taking so long. There are quite a few interesting cars included in this case, and we'll look at some of them in the next few paragraphs. We are just one case away from the end of the 2022 mainline series, which means more diecast goodness is coming our way soon.

You could say that this year has been pretty good for Hot Wheels collectors. Mattel has released a bunch of new cars throughout multiple series, with various options to fit everyone's budget.

Be it that you're an adult collector who takes things seriously or just a 1/64 scale enthusiast, you're bound to find something exciting. And case P for 2022 has brought with it a new Super Treasure Hunt and Treasure Hunt. The STH model for this case is the 1932 Ford in Spectraflame Powder Blue with a Gulf livery.

Designed by Gary Saffer, this casting has been around for over 20 years now, and you can find both Premium and Regular versions of it. In case you're eager to get your hands on the STH variant, some people are already selling it via eBay for as much as $135.

But you can find it cheaper than that if you keep looking through the listings. We're at case number 14, and most TH models this year were based on fantasy cars. The only exceptions were the 1998 Subaru Impreza 22B STI, the 1958 Chevrolet Impala, the 1987 Dodge D100, the Morris Mini, and the 2017 Jeep Wrangler.

The TH model for case P is the relatively rare Muscle and Blown. This casting was introduced last year, and this is just its third iteration so far. It may not be as cool as the Ford STH, but it's still lightyears ahead of other TH cars like Gotta Go or Duck 'N Roll.

With that being said, let's see what else this case has to offer. Right off the bat, we're getting a recolor of the 1995 Mazda RX-7 FD3S. This is the third FD to be released this year and the second one to sport a Falken livery. This is almost reminiscent of the 2019 Speed Graphics ZAMAC edition.

It's good to see the GR Supra again, and this seems to have a similar livery to the MK IV model that was featured in one of the previous cases. The 1968 Mercury Cougar isn't half bad, but it's not quite as good as the 2021 Spectraflame Green STH version.

Some people are asking for as much as $200 for one of those. The Pagani Zonda R is back again, and we can almost see people hoarding dozens of these for display or resale purposes. If this gets enough attention, perhaps we'll get the Huayra R as well.

One of the highlights of case P has got to be the LB-Silhouette Works GT Nissan 35GT-RR Version 2. This casting was introduced in 2021, but none of the previous colors have been so spectacular. You'll occasionally see people complaining about Hot Wheels decals on the side, but this time they're perfectly integrated with matching black wheels.

This is without doubt one of the best variants offered in 2022, and all it needs now is a Real Riders version! The 1986 Toyota Van also looks better in Metalflake Gray than it did before in Metalflake Dark Red. This vehicle has so much JDM Camper potential!

Both the Dimanchini Veloce and the Audi RS e-tron GT are now featured in new colors, and Mattel seems to have a thing for red. The Pininfarina Battista has also been refreshed with a new paint job. After white, yellow, and red, we're getting a Metalflake Blu Iconica version and it's just perfect for any exotics enthusiast.

If we would have to pick just one more casting to talk about, it would certainly be the Aston Martin Vantage GTE. Finished in Lime Essence, this is a new addition to the Hot Wheels line-up. It is of course part of the Exotics Series, alongside other vehicles such as the Lotus Evija. 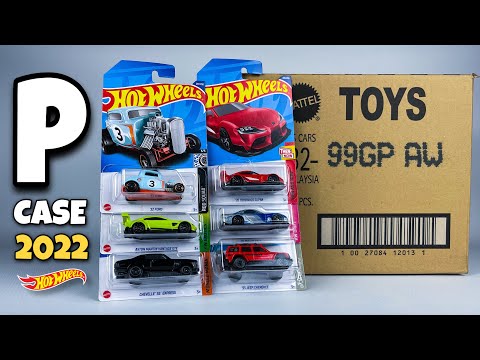