3 Evolv Stride E-Scooter Comes With Full Suspension, Boasts a Range of Up to 40 Miles

4 Freego F12 E-Scooter Is Made for Comfortable Urban Rides, Has Large Wheels and a Wide Deck

New, Foldable Mosquito Claims to Be the Most Powerful Ultra-Portable E-Scooter Available

Foldable, lightweight, and minimalist in appearance, Fluidfreeride’s new Mosquito is a versatile two-wheeler, touted by the manufacturer as the “most powerful ultra-portable scooter” available.
9 photos

Fluidfreeride is a Miami-based manufacturer that’s been around since 2018 and makes a wide variety of electric scooters, from casual ones to advanced, touring, and expert two-wheelers. Its Horizon, Apollo, and Wolf models are some of the company’s best-selling models and the freshly released Mosquito might become just as popular.

Described as both powerful and portable, the Mosquito is impressively lightweight, tipping the scales at just 29 lb (13 kg). Its weight is just one of the factors that make the two-wheeler so portable and easy to haul around. The scooter also comes with a folding design, measuring just 41.5 x 5.65 x 13” (105.4 x 14.3 x 33 cm) when folded. Its handlebars are also foldable, to make the Mosquito even easier to store in tighter places. It has a 265 lb (120 kg) weight limit.

The Mosquito packs 8”x 2” solid tires, physical brakes (rear drum and rear step on brake) as well as electric braking that recharges the scooter’s battery while you’re riding. It has dual spring-based suspensions, a thumb throttle, a color display in the center, bright LED lights in the front and rear, and a loud, integrated electric horn to keep your path clear.

While the Mosquito was designed with ultra-portability in mind, it is also a fast and powerful two-wheeler, packing a 500W motor with a peak output of 700W. The scooter can hit over 25 mph (40 kph).

Fluidfreeride equipped it with a 48V/9.6Ah battery that claims to offer a range of over 20 miles on a charge, requiring five hours to fully replenish.

Those who are interested in getting the Mosquito can order the electric scooter on the company’s website for a price of $900. 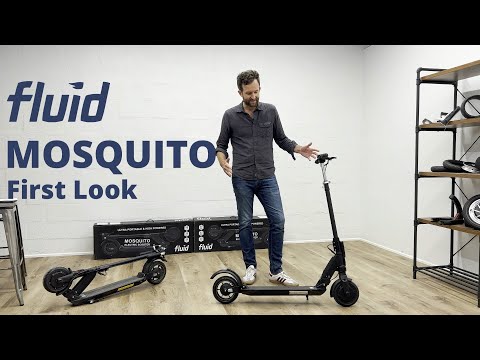