Among other things, Ferrari is in the habit of unveiling its most impressive car to date every ten year or so, and the latest hypercar from Maranello coincidentally was unveiled back in 2013, at the Geneva Motor Show.
10 photos

We are, of course, talking about the Ferrari LaFerrari, a hybrid monster that re-wrote the history books in Modena and was a sign of things to come at Ferrari, especially regarding the future of Prancing Horse powertrains.

While the 2022 Geneva Motor Show would have been the perfect venue for the ‘Cavallino Rampante’ to unveil a true successor to the LaFerrari, the event has been cancelled because of the international health crisis.

That said, Ferrari turns 75 years old this year, and since you can't really postpone birthdays, the yet-to-be-announced LaFerrari replacement can be unveiled at just about any venue, even online, and people would still dream about owning one.

Rumors about such a model’s existence first appeared when FIA announced the regulations for the 2023 Le Mans Hypercar class, which caught the interest of the Italian outfit and would have also seen a production version of next year’s Ferrari racer to be built as an homologation special.

With that in mind, the rules for the Hypercar class have since changed, no longer requiring a road car to be built, but that doesn’t mean that Ferrari isn’t planning a worthy successor to special cars like the GTO, F40, F50, Enzo and especially the LaFerrari.

Judging by the two spottings of the LaFerrari Aperta-based mule in the past couple of months, the project is probably well under way, but the latest sighting doesn’t reveal more answers, instead creating more questions.

If you look closely at Varryx’s spy video bellow, the mule is likely a plug-in hybrid, since it has two fuel/plug-in caps, one on each side of the cockpit. Other than that, not much is known about its powertrain, and judging by the exhaust note it could be anything from a twin-turbo V12 to the new V6 from the 296 GTB, paired with at least two electric motors.

Its total output should be well over 1,000 horsepower, while performance on track is likely to be somewhere between the LaFerrari and the FXX-K Evo.

These are all speculations, mind you, and the matte black mule could be a different future Ferrari altogether, especially since it’s also kind of unusual for a hypercar from Maranello to not sport center-lock wheels in this day and age (the prototype has five lug nuts per wheel). 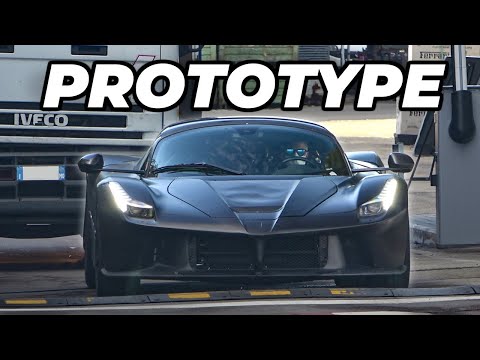