1 Boots Becomes the First Community Pharmacy in the U.K. To Deliver Meds by Drone

2 Wingcopter Raises $42M, Teams Up With One of the Largest Grocery Retailers in Germany

3 Amazon Is Finally Ready to Launch Its Drone Delivery Service, Will Kick Off in California

4 Walmart Is Expanding Its Drone Delivery Network, Aims to Reach Up to 4M U.S. Households

The company that launched the first fully autonomous urban drone delivery system in the world is making significant progress in expanding its business throughout the United States. Flytrex recently announced that it’s received approval from the FAA (Federal Aviation Administration) to increase its delivery radius.
6 photos

As stated by the drone delivery company, the newly received approval allows it to expand that radius from one to two nautical miles across all its operating stations in both North Carolina and Texas. That means that Flytrex will be able to reach significantly more customers, increasing their number from the 40,000 who were previously eligible to approximately 100,000.

Flytrex currently makes thousands of deliveries every month and this number will continue to grow as is the company’s list of partners. And speaking of, Flytrex offers its drone deliveries in collaboration with Causey Aviation Unmanned, with clients having the option to order a wide variety of items such as food, drinks, and more, from multiple restaurants and retail chains.

This FAA approval is just one of Flytrex’s latest achievements. Just a few months ago, the company also managed to bring its drone delivery service to Granbury, Texas, outside of Dallas-Forth Worth. In addition, Flytrex has three operational stations in North Carolina (in Raeford, Holly Springs, and Fayetteville).

Ordering is done via the Flytrex app, with customers being offered constant updates regarding their order status until the package gets to their backyard. Drones fly at 33 mph (53 kph), boasting of making a delivery in less than four minutes. Packages are safely lowered via a wire straight into the client's backyard.

Flytrex made the headlines back in 2017 when it announced that it launched the world’s first fully autonomous urban drone delivery system in Reykjavik, the capital of Iceland. Next on the plate for Flytrex is to continue its flightpath to bring its three-minute delivery service to as many American backyards as possible and eventually cover the entire country, as stated by Yariv Bash, Flytrex co-founder and CEO. 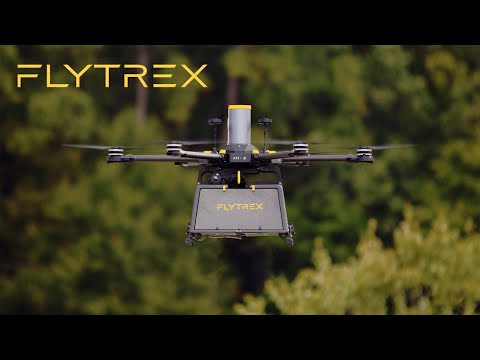