1 Cannonball: An Abridged History of the World's Greatest Outlaw Race

Some of us picked up new hobbies during the COVID-19 lockdown, perfected new ones or took to daydreaming about the day when we’ll be able to develop others.
13 photos

Three or four guys in the U.S. chose to spend lockdown time putting together – and pulling off – a new cross-country Cannonball record. The feat took place at the beginning of the month, with news of it transpiring by accident when a friend enthusiastically posted about it on social media, Road And Track reports.

He’s since deleted the post and the photos that seemingly confirm the new record, but he owns up to the snafu with a “don’t shoot the messenger” post. The same media outlet notes that the record was probably meant to be kept a secret until a proper reveal could be made.

No one knows who is behind it, not even Cannonball regulars. R&T speculates that it’s a team of three or four people at the wheel of a souped-up 2019 Audi A8 sedan, whose only known (at this time) modification is the inclusion of “red plastic marine fuel tanks ratchet-strapped into [the] trunk.” The race started on April 4 at 11:15 pm at the Red Ball Garage in New York City and ended at the Portofino Hotel & Marina in Redondo Beach, California, in under 27 hours.

If this record is legitimate (and there’s no official way of knowing, since Cannonball races are still highly illegal), it will beat the one set in November 2019, when a 2015 Mercedes-Benz E 63 AMG was used to drive cross-country without stopping in 27 hours and 25 minutes. This would also be the most controversial record set to date in the long history of the race, since it was set in a time of harsh travel restrictions.

Even the Cannonball community is outraged that someone would attempt to set a new record under COVID-19 lockdown. Another attempt had been scheduled for April 4 but was canceled when most states issued stay-at-home orders to flatten the curve of the infection with the new Coronavirus. In this context, taking to the road in a highly illegal and highly dangerous race against the clock, when anything that could go wrong would require resources badly needed to fight the spread of the virus, is the epitome of recklessness.

Apparently, there’s even some talk within the same community of not recognizing the new record, given the context in which it was set. That’s not likely, though, since there’s no sanctioning body for illegal cross-country races so there’s nothing “official” about it. 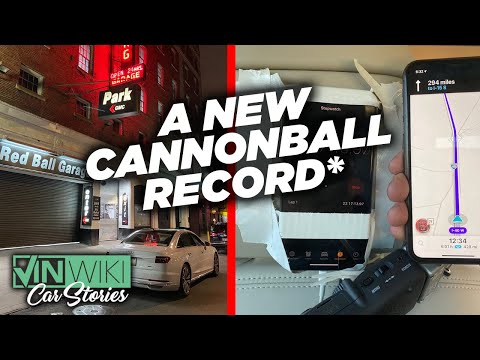