New Chevy Corvette Z06 Gets Chased Down the Highway, Sounds Very Exotic in the Open

Chevrolet has yet to start accepting orders for the 2023 Corvette Z06, as the first units of the blue-collar supercar will start arriving at dealers nationwide this summer. Thus, it’s always special to see one in the open and hear that naturally aspirated V8.
7 photos

Filmed somewhere in the U.S. of A. earlier this month, with the video making its way to Reddit, this gray example features no camouflage whatsoever. More importantly, though, you can hear that magnificent engine too, not only the wind noise, with the driver downshifting, and hitting the throttle for the guy filming it.

Chevy’s flat-plane crank V8 has Ferrari to thank for its existence, as the bowtie brand bought a naturally aspirated 4.5-liter V8 that used to power a 458 from eBay, prior to the development start. They paid around $25,000 for it and were actually surprised when it showed up at the Michigan facility. Subsequently, the company’s engineers took it apart to learn its secrets and then used that knowledge to build their own power unit.

With a 5.5-liter displacement, forged titanium connecting rods, low-profile forged pistons, titanium intake valves, CNC-machined ports and combustion chambers, triple tuning valves, dual throttle bodies, and so on, the V8 developed by Chevy is very potent. It kicks out 670 horsepower and 460 pound-feet (624 Nm) of torque, enabling a 0 to 60 mph (0-97 kph) in just 2.6 seconds in the new Corvette Z06. The supercar for the masses is capable of hitting speeds well over 200 mph (322 kph) and needs around 10 seconds to complete the quarter mile.

As we already told you, the 2023 Corvette Z06 will start arriving at dealers this summer. Full pricing details have yet to be confirmed, but it is obvious that it will be more expensive than the Corvette Stingray, which carries an MSRP of $60,900. 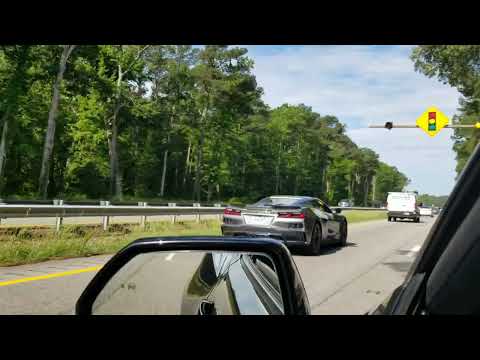