Man Climbs Out on Roof of Moving VW Passat, Slips and Falls

Home > News > Car Profile
Mihnea Radu
The F82 BMW M4 is widely considered one of the best M cars of all time. It brought inline-6 engines back, looked the part and drifted like a champ. However, it's almost time for it to be retired.
4 photos

But fear not, as the next generation promises to be even better. Expected to be called the G82, this new M4 has shied away from the spy cameras. However, the German magazine Auto Bild believes it has all the juicy details.

In its latest video report, our source states the second model to wear the M4 badge will debut with between 460 and 510 horsepower, similar to the M3 sedan. This will still come from a 3-liter bi-turbo engine, but a 48-volt mild hybrid system could be added to lower emissions, similar to what Audi is doing right now.

The "normal" version will have 480 horsepower, an 8-speed gearbox and a similar sporty xDrive system to the one in the M5. However, it's not clear at this point if it will include drift mode (RWD) as the X3 and X4 M skipped past this feature.

At the top of the range sits the M4 Competition with 510 horsepower. The output isn't coincidental, as it allows the Bimmer to play in the same league as the current Mercedes-AMG C63 S and Alfa Romeo's Giulia QV. And for those looking for more driver engagement, BMW will also offer a "pure" model with reduced soundproofing and a manual gearbox linking 460 HP to the rear wheels.

About a year after the M4 Coupe, BMW will launch the successor for the less popular M4 Cabriolet, with the main difference being a folding fabric roof rather than a metal one. We don't care for that one, but the stiffer, lighter body compared to its predecessor could be just what the performance doctor ordered.

As far as looks are concerned, the renderings created by our German source paint a compelling picture, with a new kind of grille design, aggressive aero and narrow headlights. Above all, it still looks like an M car, just one that's ready for the next decade. 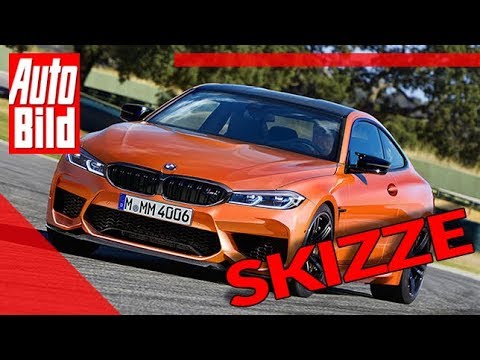