1 This Is the New 2021 Bentley Bentayga Speed, Coming Next Week

5 Bentley Bentayga "Bacalar" Is the SUV Facelift We Want
Coverstory

Home > News > U-turn
Mihnea Radu
SUVs have been drag racing luxury German sedans with massive engines for a really long time. So there's something... traditional, almost old-fashioned about this drag race between the new 2021 Bentley Bentayga and the Audi S8.
5 photos

As you might have guessed, the Bentayga is a new model with a different-looking trunk and a much better interior. This video from Carwow is not only a drag race, but also the first review we've seen of the new uber-SUV, so we recommend watching the whole thing. It's a case of "nice arse, shame about the face" if you ask us.

While the Bentley 4x4 smells like new money, it obviously connects itself nicely to Audi. The chassis and a lot of the technology under the skin are the same as the Q7, as well as the Porsche Cayenne. And who here can forget the old drag races featuring the first Turbo or the Q7 V12 TDI?

Those Germans do like an exotic engine, and they sometimes like to put it under the hood of a big limo. While the Audi S8 doesn't feel like an important car, it holds huge significance for the quattro brand, which is probably why they didn't discontinue it... yet.

You guys know we like some specs to go with our drag races. While both cars have the same 4.0-liter TFSI engine, which is a twin-turbo V8, the output isn't the same. The Bentayga is rated at 542 hp and 568 pound-feet (770 Newton-meters). That's all you really need, though Bentley will offer both a larger and smaller displacement.

Meanwhile, the 2020 Audi S8 is making 563 hp and 590 lb-ft (800 Nm) of torque. But these are just round numbers the European marketing departments wrote up. There have been plenty of instances where real-world outputs are the same.

By now, you're probably thinking that these two are evenly matched, yet that's not what happens in the drag race (16;40 mark of the video). The Audi S8 just walks all over the Bentley. With the way the Audi sedan accelerates, we'd say it makes way more power, possibly because it's a slightly older model. 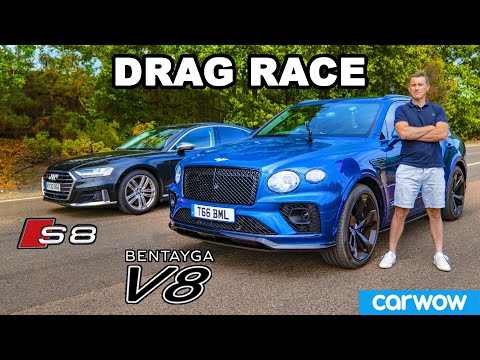