2 Audi Q4 Confirmed, Will Stand Out from Other Q SUVs

Before there was a Volvo XC40 or before BMW put the X1 on a front-wheel-drive platform, Audi made something called the Q3. It's been around for ages, and people stopped taking it seriously, but the brand-new model has just been launched in Europe, and Mat Watson pitted it against the two rivals mentioned above.
3 photos

What do we mean by "surprising results"? Well, usually the newer car has most of the advantages, but that's not the case with this review. Surprisingly, even though the BMW X1 looks smaller and less roomy, it's got a much bigger trunk than the other two while offering sufficient rear seat space.

The Volvo is pretty much how you'd expect, a relaxed vehicle, but it also feels bigger behind the wheel. The Carwow review compares it to a Land Rover in that you approach corners with caution and have a long flat hood in front of you. The Audi Q3 also surprised with its handling. Even though BMW is known for its sporty setups, the new Q3 is said to take corners a little more keenly.

But that's not enough to secure it the victory, which goes to the Volvo XC40, which supposedly looks the coolest and is the most comfortable, which is the main thing you want from an SUV. Many will not agree in both those regards, but thankfully, there are plenty of choices around. It's just as shame that Mercedes isn't ready to compete yet, because they have something to say, especially in the interior department.

We've read through the comments and found some calling the X1 an embarrassment to BMW, others arguing that the Audi tries too hard or that they're in the habit of cheating. Very few folks have anything bad to say about the Volvo, which could make it too common. So which of these three would get your money? 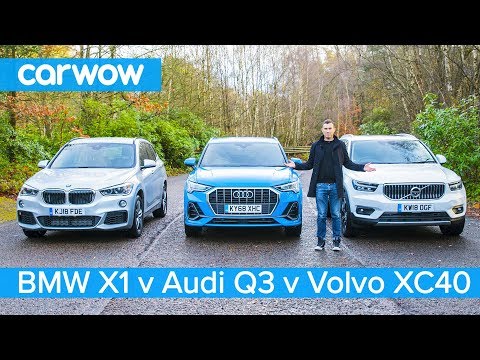