1 Hyundai i20 N Line Is All About Sporty Looks, Tame Powertrains

2 Sprint or Endurance? Both Are Possible With the All-New Hyundai Elantra N TCR

5 Hyundai Retires Elantra GT and Elantra GT N Line in the U.S. for the 2021 MY
Car video reviews:
Coverstory

Hyundai seems to be on a never-ending expansion process when it comes to N-flavored models. There’s a secret to the recipe, though – some are side dishes and just a few make up the main courses. We are code-talking about the “N Line” models and the fully-fledged N performance machines, naturally. And the latest addition comes in the form of a subcompact hot hatch with totally purist views for the European market.

Better prepare a spreadsheet if you want to keep track of Hyundai’s regional plans for the sporty-enhanced N Line versions and outright N performance bombs. For example, Europe has received a slew of models in recent months – from the funky Kona N Line crossover to the recently facelifted i30 N.

On the other hand, the North American division is eagerly awaiting all things N related to the Elantra. They already count on the Elantra N Line, but of course fans of the South Korean automaker are holding back the greens for the Elantra N... as up until now they are being enticed with racers such as the Elantra N TCR (Touring Car Racing).

Back on the Old Continent, the Hyundai N galore continues with the arrival of the first-ever i20 N, hot on the heels of the third generation B class model adding the N Line-flavored derivative. This time around we have the real deal, a hot hatch version that will go toe to toe with iconic representatives of the segment, such as the Renault Clio RS, Ford Fiesta ST, or the all-mighty VW Polo GTI.

The new kid on the block has its own credentials, because the i20 N brings the thrills of racing to the roads – as Hyundai declares the series-produced model was fully inspired by the i20 WRC rally car. The strategy also includes an everyday-usable sporty experience, dynamic innovations, as well as flagship-grade performance courtesy of a new generation 1.6-liter turbo GDi “Gamma” powerplant.

With its enhanced design and racetrack capable hot hatch driver-focused dedicated features – such as Launch Control and Rev Matching – the new i20 N aims to deliver a proper high-performance experience as it takes its place alongside the i30 N and i30 Fastback N in the European lineup. Availability starts from spring next year, with pricing details probably revealed closer to the actual market launch.

The WRC pedigree is a great starting base for the i20 N, after the company was crowned manufacturers’ champion during the past season, but the company is also banking most of the new model’s appeal on its outright performance-dedicated styling. Elements inspired from motorsport combine with the brand’s current Sensuous Sportiness design identity, while the overall appearance is also sleeker – partially because the i20 N sits 10 mm (0.39 in.) lower than a stock i20.

Up front there’s a very wide radiator grille with dedicated logo and unique chequered flag-inspired patter, doubled by a new bumper with larger air intakes and a lip spoiler infused with the N performance division’s signature Tomato Red details. The contrasting hue is also present on the side skirts and on the back, just to make sure anyone can recognize the i20 N from every angle.

The WRC connections continue at the rear with the unique WRC-inspired roof spoiler, while the rear bumper styling pays homage to its larger siblings, the i30 N and i30 Fastback N. Hyundai doesn’t seem to think that power is in the numbers, so there’s just one – albeit large – tip for the sport exhaust system. The front LEDs and the signature (now darkened) taillamps, alongside a set of newly designed matte grey 18-inch alloys complete the exterior package.

Moving inside, the i20 N comes with its own bespoke touches that sets it apart even among the rest of the N performance models – chief among them a set of new sport seats with integrated headrest. N-branding is, naturally, all over the place – on the steering wheel, stick shifter, or the pedals.

Driving credentials for the little hot hatch include a raft of technology innovations, as the classic six-speed manual transmission is joined by a Launch Control system, an N Corner Carving Differential, as well as a Mechanical Limited Slip Differential (mLSD), among others. The N Grin Control System also controls the engine, ESC, exhaust sound, and steering via user-controlled modes: Normal, Eco, Sport, N and N Custom. 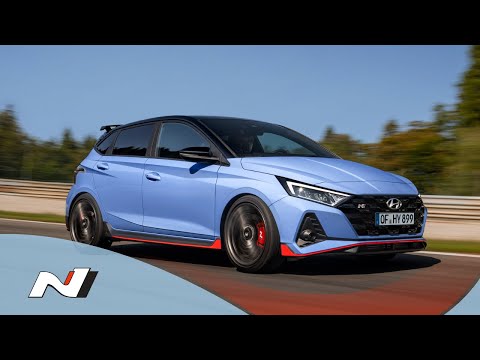