4 2023 BMW M2 Is Back for More Testing, Watch It in Motion on Public Roads Here

5 2023 BMW M2 to Give Its Electric Brother a Run for Its Money
Car video reviews:
Coverstory

The new generation BMW M2 Coupe has entered the cold-weather testing phase in Scandinavia, which is where our spy photographers caught this prototype doing its thing on an icy road.
25 photos

In the visual department, it looks pretty much identical to our previous sighting, dating back to last week. The thick camouflage has yet to come off, and with the grand unveiling expected to take place in the second half of the year, prior to hitting assembly in late 2022, we reckon it’s going to be a while until it starts showing some skin.

Sitting at the top of the new-gen 2 Series Coupe family, the 2023 M2 will set itself apart by featuring a more aggressive styling. It will be defined by the swollen fenders, different front and rear bumpers, bigger air intakes, chunkier side skirts, and dedicated diffuser at the back. It will also feature quad exhaust pipes, more exclusive wheels, beefier brakes, and different suspension, which should put the spines through the top of its occupants’ skulls.

Front seats with extra side bolstering, bespoke upholstery options, perhaps bedecked by different stitching, piping, and trim, and updated software for the infotainment system and digital instrument cluster should be found inside, next to the typical BMW M logos that will also decorate the exterior.

Power wise, the new BMW M2 will feature a twin-turbo 3.0-liter straight-six. The engine is believed to be a de-tuned variant of the one found in the M3 and M4, and if the rumor mill holds water, then we might be looking at around 480-490 horsepower available on tap. That should give it a significant advantage over the current M2 Competition, which has 405 hp. It’s been said that a battery-electric derivative might be in the pipeline too, which seems like the natural approach to ease the transition between ICE and EV, because this model is expected to be the last of its kind to run on dead dinosaurs. 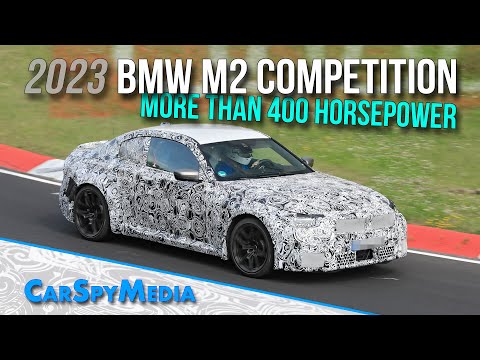