The Fast Lane recently took delivery of a brand-new Ford Bronco, a four-door First Edition with a sticker price that dwarfs a fully-loaded Jeep Wrangler as long as we don’t include the Rubicon 392. I wish I was joking, but the molded-in-color hardtop roof of this Bronco is already rattling.
6 photos

“We did have that kind of popping sound the second we picked it up,” said Roman Mica. “I’m really not impressed with the quality at all on this one,” added Tommy Mica, referring to the felt-like headliner that is peeling off in many places. Adding insult to injury, the senior discovers a sponge-like thing on the driver’s side of the roof, which appears to be a makeshift way of suppressing the rattling/popping sound the hardtop makes while driving.

As much as I love the sixth-generation Bronco - and I really do because it has forced Jeep to improve the Wrangler - this clearly isn’t a $63,200 truck. Worse still for the Ford Motor Company’s golden goose, there’s another set of strange noises coming from somewhere out back on the passenger side.

Instead of going to the dealership and fix these problems under warranty, The Fast Lane decided on another solution. More specifically, Roman intends to give Bestop a call and see if they can sell TFL a good ol’ soft-top roof.

To be honest, I don’t blame Roman and Tommy for taking a sledgehammer approach to fixing this infuriating problem. There are dozens of Broncos parked at the Michigan Assembly Plant with “bad roof” written on the side windows, and many customers have complained about a snakeskin pattern appearing on the outer laminate layer. Bronco customers have also reported misaligned latches, raw outside edges, etching in the glass, warping around the mounting bolts, cavities, as well as… wait for it… headliner separation.

Given these worrying circumstances, waiting for the 2022 or even 2023 model year seems like the best way of getting a higher-quality Bronco. 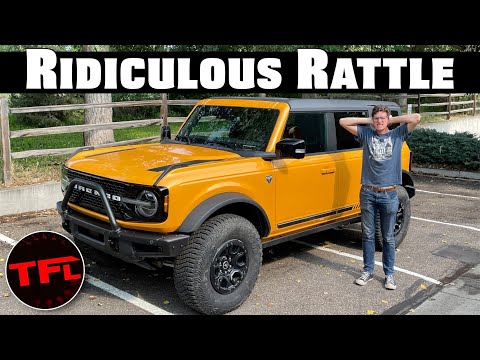