3 Forget Bulky Cruise Ships, This Two-Decade-Old Sailing Yacht Is the Way to Go

4 Navier Raises $7.2M to Build the Boat of the Future, a 27-Ft Electric Hydrofoil

Cristian Curmei
For a couple of years, we've been hearing plans for an all-new, industry-shifting, electric hydrofoil boat from Navier. Well, the time has come for us to finally see the product of millions of dollars raised in crowdfunding operations since this vessel's first conception.
14 photos

If the name Navier sounds familiar, you probably have some interest in the boating industry. If you never have, by the end of this article, you may consider signing up for one of their ground-breaking machines, the N30. It's basically the N27 concept that has been used to gather the bucks, but bigger, 3 feet (0.9 meters) bigger, for a total of 30 feet (9 meters) of boat. Nonetheless, the same magic is in place, like a hydrofoil design and autonomous functions.

Now, the idea behind Navier and the N30 is that of efficiency and eco-friendly goodness. What I mean by this is that Navier managed to raise millions of dollars by promising a boat that is all-electric and as efficient as current technology will allow. According to the manufacturer, the N30 "... is 10X more efficient than traditional gas boats..."

Until this point, the manufacturer has simply been working behind the curtains, with this being the very first time the public can witness a working prototype. Actually, "prototype" doesn't cut it, because pre-orders are already underway for one of the three available versions. Let's see what we're in for.

According to information we published in previous articles on autoevolution, the N boats are built out of nothing more than carbon fiber, but the real gusto lies in the propulsion system - electric - that hydrofoil I mentioned and the autonomous abilities of the ship. Let's start with the electric drive system.

Electric drivetrains are nothing new, and the boating industry has been tampering with them for ages, but one thing is for sure, as we advance into the future, we will surely be seeing more and more electric boats on the market, especially if we consider that technology is getting better and better. And so, the N30 will feature a max range of 75 miles (120 kilometers). This may not sound like much now, but give Navier time to kick things into high gear. If we think of the N30 as a day boat to cruise local coastlines, it should do just fine for a fishing trip or island hopping. Imagine the N30 as part of your superyacht tender fleet. Water taxis have been a part of the N30's sales pitch too.

Part two of this boat's abilities lies in using hydrofoil technology to float over 4-foot (1.2-meter) waves, all the while increasing speed and range. If you're familiar with hydrofoils, great. If not, all you really need to know is that this design functions similarly to an airplane's wing, helping lift a ship's hull out of the water and reducing drag considerably. For the N30, speeds upwards of 30 knots (35 mph) are possible.

Couple that with the all-electric propulsion I mentioned, throw on some automatic docking features, advanced autopilot, and a slew of other tech and software, and that's the N30. Did I mention this thing will have an app? Yup, and you can check on your eco-friendly baby from anywhere in the world. Navier states that this bundle of software results in a 50% drop in expenses for your "commercial operations." With a heavy use of software, the N30's autonomous navigation system "will eventually remove labor costs."

Oh, and if you doubt this company's ability to deliver, take the $10 million that the Co-Founder of Google, Sergey Brin, threw into the Navier game. Starting to get the idea of what we're really up against? Considering that Navier's Founder, Sampriti Bhattacharyya, has a Ph.D. from MIT in Robotics and is a former aerospace engineer, this company's future seems locked in. Stand by for prices and all that, or just reach out to Navier. 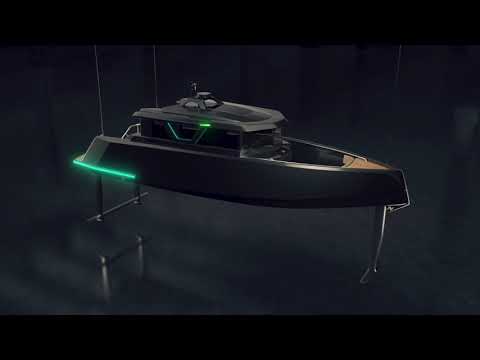 Editor's note: This article was not sponsored or supported by a third-party. Images in the gallery showcase N27 renderings and the N30 boat.