1 Assetto Corsa Ford Motorhome Now Has an F1 Engine Inside, It's as Fun as It Sounds

3 Virtual RV Gets a V8 Transplant, Goes All Out at the Nürburgring

4 Ford RV Spotted Digitally Drifting in Japan, Sounds Like It Has a Rotary Engine Inside

We had a lot of fun yesterday with our RV/Formula 1 challenge. Using the engine from different F1 cars from the '50s up until the modern-era hybrid ones was a blast, and you can watch the action for yourself. We've been fooling around quite a bit with our virtual Ford Motorhome, but we realized there was one thing we hadn't done yet. And that was engaging in a proper race against other competitors or at least the in-game AI.

So we set out on a journey to discover the most exciting recipe for such a race. So far, our RV has done laps of Tsukuba, Pikes Peak, the Nordschleife, Paul Ricard and Mugello. Our first thought was to move towards a more off-road experience.

There are no rally locations in Assetto Corsa when you first install the game. But there are a few options online after you do some digging. So we downloaded the Dakar rally, a rallycross location, and a few other famous WRC stages.

After some initial testing, we realized that this Ford RV was going to need some serious upgrades if it was going to drive on gravel. Having a high center of gravity and a massive body isn't helpful when you're going over bumps and curbs at high speed, either.

So we ultimately abandoned the idea and started searching for something else. We downloaded a ton of content while on this quest, and we even came across a replica of the Autobahn, the Top Gear test track, a location built for top speed, and even a Race of Champions venue.

But as soon as we saw Daytona International Speedway on the list, it clicked. We were about to take the RV out on a NASCAR track for some good old bumper-to-bumper action. It turns out that finding a NASCAR machine isn't as easy as finding a Formula 1 car.

But we did come across a Ford Fusion and a Chevrolet SS. Naturally, we wanted to keep this build all-Ford, so we opted to use the engine from the Fusion. In a less expected turn of events, whoever built this mod using the sound file from the Corvette C7R, so that's that.

According to the car's file, it should churn out 620 horsepower and 516 lb-ft (700 Nm) of torque. We later stumbled upon a 2019 Ford Mustang with 753 horsepower, but for our test, less power was going to be just fine. As always, we decided to shave some weight off of our motorhome.

We brought it down to 3,439 lbs (1,560 kg), and we used the tires from the Mustang. Now here comes the silly part. After allowing for full mechanical damage, we selected a full grid of opponents.

That means that we're going up against 42 other RVs with the same spec. Not only, that but we also bumped the opponent's strength to 99.7% and their aggression to 100%. That should make for an exciting drive. Once we lined up at the start line, we realized the scale of it all.

Having 42 other Motorhomes in front - because yes, we chose to start from last place - will block your whole field of view. And even with the change in settings, not all of your opponents seem to be as fast going off the line.

What's even worse is that certain sections of the track are narrower, and there's no way of overtaking without going on the grass. So the only thing you can do is wait for a window and go for it. It doesn't take long until an opportunity arises, but it looks like you can only pass on the outside.

And that is up on the bank and next to the wall. As if navigating an RV at those speeds and so close to a disaster wasn't difficult enough, your opponents will constantly try to block you. The slightest mistake will cost you the race, and you don't even have to hit the wall to suffer a DNF.

In all the insanity, some of the RVs in front can tend to pile up, creating a seemingly impenetrable barrier. Seeing that we've set the race durations to 5 laps, or about 16.5 km, we have to move fast if we're going to win this. It took a while to get in the lead, but it wasn't impossible.

But once we caught up to a slower group, it all went south. We could see the finish line, and yet we still managed to total the engine. We finished the race thanks to the AI hitting us from the back, but it wasn't a victory. Still, this was one of the most exciting race formats we've ever experienced so far! 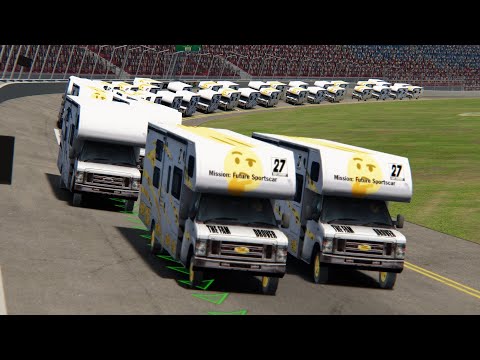