4 Lexus LFA and Supermodel Rianne Ten Haken Challenge Each Other

5 Red Lexus LFA Lands in Costa Rica
Up Next 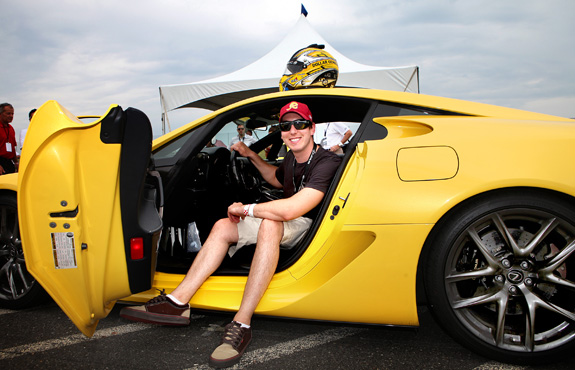 Driving in NASCAR might get your adrenaline pumping, but racing outside the track at 128-mph (206 km/h) in a 45 mph (about 70 km/h) zone is definitely a one-of-a-kind experience. That was experienced by the NASCAR star Kyle Busch. He pleaded guilty after he was cited in Iredell County for speeding in his Lexus LFA. A driver for Toyota, Busch decided to plead guilty to speeding charges and accepted the accusations of careless and reckless driving.

"I've apologized for my actions, whether it's been the people up and down Perth Road, whether it's been my fans, my family, or my sponsors. Certainly there's remorse from my side that it was actions not appropriate for those conditions and we just try to continue on and move on now," Kyle Busch was quoted as saying by wect.com. The prosecutors revealed the fact that at 128 mph (206 km/h), his Lexus LFA was covering 187.7 (about 57 meters per second) feet per second.

Thus meaning that other drivers on the road especially those coming from side roads, would not have been able to see the car until it was too late. The consequences came up fast as Busch was sentenced to 30 days suspended and he was given a on-year unsupervised probation. He was also fined $1,000, and he had his driver license suspended for 45 days. The story goes back to May 24th when it all happened in Iredell County.

Kyle Busch, who races for Toyota on the Sprint Cup Circuit for Joe Gibbs Racing, was driving a high powered $400,000 Lexus LFA. The bright yellow LFA (Lexus Fuji Apex) supercar was given to Busch for a test drive.