Silvian Irimia
The Cup Series family returns to the world-famous Sonoma Raceway, a track loved by both the drivers and the fans because of the lovely scenery and how much fun it is to drive on.
6 photos

Besides that, the Sonoma Raceway has the carousel corner, which is one of the most challenging corners on the calendar. Being very tight, many drivers use the carousel as an overtaking opportunity, but usually, it's not working. At the same time, the track is highly elevated, so the engines need to resist the race distance with less air than usual.

After last week, Joey Lugano had an intense battle with his rival, Kyle Busch, on the final laps at the World Wide Technology Raceway. Kyle Busch looked like a sure winner, but Lugano had a better restart after a caution and passed Kyle for his second win in 2022.

Even if Kyle lost the race last week, many experts have him as the favorite driver for the win in Sonoma. And they are not wrong because he is one of the most talented drivers on the grid, impressing everyone weekly. In addition, he sits second in the drivers' championship, only nine points behind Chase Elliot. In the manufacturer standings, Chevrolet is leading the way ahead of the event held at the Sonoma Raceway.

23:29 UTC  What a race made by Daniel Suarez to take his first-ever Cup Series win. The following couple of races will be even better and tighter between the drivers. Until then, congrats to Daniel for making history. 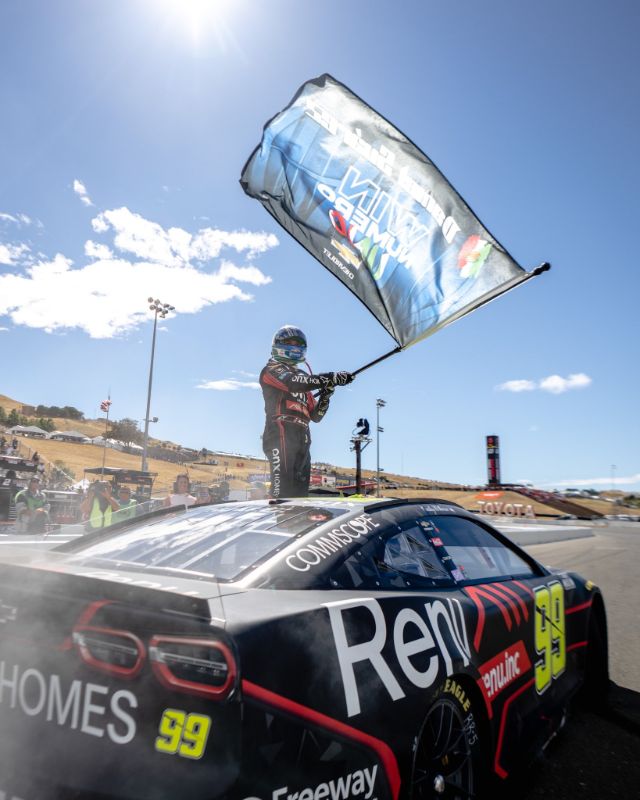 23:10 UTC  And it's over! Daniel Suarez becomes the first Mexican driver to win a NASCAR Cup Series race. What a day for the history books and for Daniel. 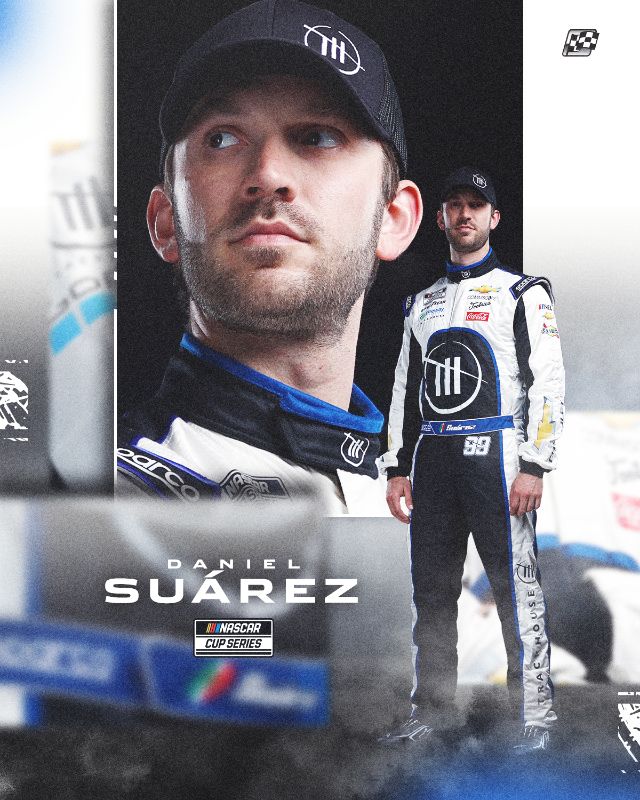 23:07 UTC  AJ Allmendinger spun and hit the tire barriers at the bottom of the hill in Turn 3, but he keeps going and the green flag remains out. White flag for Daniel Suarez.

23:05 UTC  Daniel Suarez's lead over Chris Buescher is now nearly four seconds. The next car Suarez will have to deal with is Scott Heckert, who is running at the tail end of the lead lap.

23:03 UTC  With five laps to go, Suarez lead over Chris Buescher is growing. Still, he needs to manage the lapped car of Cody Ware.

22:55 UTC  With ten laps to go, Daniel Suarez is still leading, looking to take his first ever Cup Series win. 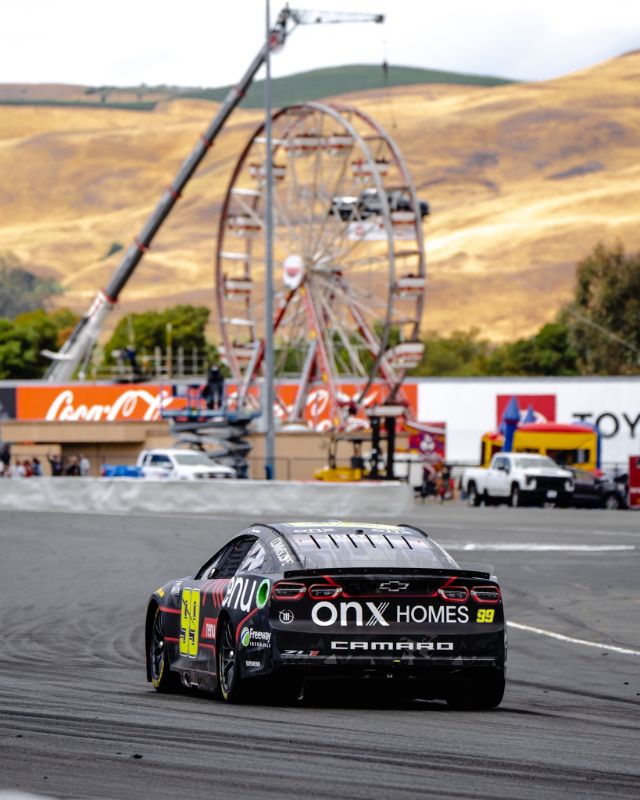 22:49 UTC  With 15 laps to go, Suarez is still ahead of Buescher by six tenths of a second, followed by McDowell, Blaney and Harvick to round up the top five.

22:46 UTC  Just check out how close the battle for P1 is. Daniel Suarez is having some problems under braking, so Buescher is patiently waiting for a mistake.

22:41 UTC  Second place Chris Buescher is now very close to race leader Daniel Suarez. I feel like some intense battles will come up.

22:40 UTC  With 23 laps to go, the restart comes and Daniel Suarez gets a big jump clear to the lead. Meanwhile, Kyle Busch has a spin at Turn 5, almost taking out Kevin Harvick and Alex Bowman.

22:35 UTC  With that caution coming out in the middle of green flag stops, the drivers who had yet to come to pit road now make their stops under caution. Austin Dillon wins the race off pit road from Brad Keselowski, who had been leading at the moment of caution.

22:34 UTC  A very unlucky moment for Kyle Larson, who had such a good race. Hopefully, he can bounce back to recover what it's left to recover.

22:31 UTC  Kyle Larson right front wheel came off as he was headed to Turn 2. It's a major blow for Kyle who had all the chances to take the win here for the second year in a row. Even worse than this is that losing a wheel means a four-race suspension for the crew chief and the two crewmembers.

22:27 UTC  Problems for Kevin Harvick on pit road! They had to jack Harvick's car back up, and he's lost a lot of time to Chris Buescher as the two exit the pits.

22:21 UTC  Daniel Suarez is still leading over Chris Buescher and he set a new personal record: most laps led in a single season, beating his previous best of 166 from 2019.

22:15 UTC  While the green flag is out, Kyle Busch Harrison Burton and Denny Hamlin are coming to the pit road.

22:09 UTC  While Tyler Reddick is checking his car for anything wrong, Chris Buescher is making moves and now sits on second place after overtaking Harvick at Turn 11.

22:07 UTC  Fortunately, we were lucky that a huge crash did not occur after the massive smoke cover created by Reddick's car.

22:04 UTC  Kevin Harvick has now overtaked Michael McDowell for P2. The top four are all running within two seconds of each other, and Harvick is now starting to make up some ground on Suarez for the lead.

22:04 UTC  Exiting the Turn 10, Tyler Reddick spun out in front of traffic, making up a huge smokescreen. As a result, Josh Bilicki had to spin his car to avoid Reddick. While Josh continues, Tyler thinks that something is wrong with his car.

22:01 UTC  Before the start of Stage 3 RFK Racing protested NASCAR's penalty to Chris Buescher. They showed the video evidence that the team did not throw their fuel can. NASCAR eventually agreed, and Buescher will now be the leader on the restart.

In addition, Buescher will also get his points back for finishing third in Stage 2. Green flag at Lap 61.

21:50 UTC  Logano is on the pit road now, together with other cars that stayed out at the end of the second stage.

21:45 UTC  Opting to stay out, Logano won the second stage of the race at the Sonoma Raceway. 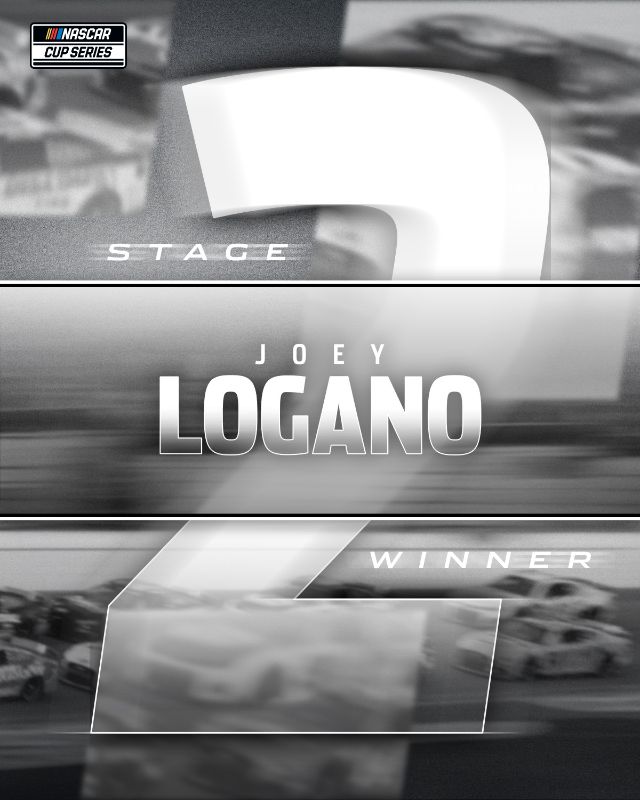 21:43 UTC  Chase Elliott has been penalized by NASCAR, and so too has Tyler Reddick. Reddick was too fast entering pit road. Joey Logano took the lead by staying out, having a five seconds lead over Aric Almirola.

21:42 UTC  Disaster for Elliot and Hendrick Motorsports. While we were praising them, the left rear tire of Elliot's car wasn't on tight as he was driving off.

21:41 UTC  Chase Elliot together with the top five are coming into the pits.

21:40 UTC  Apparently, history is made in this race. With Chase Elliot out in front, Hendrick Motorsports exceeded 100,000 miles led in their history. A superb achievement for one of the best teams in the history of NASCAR. Congrats to Hendrick. 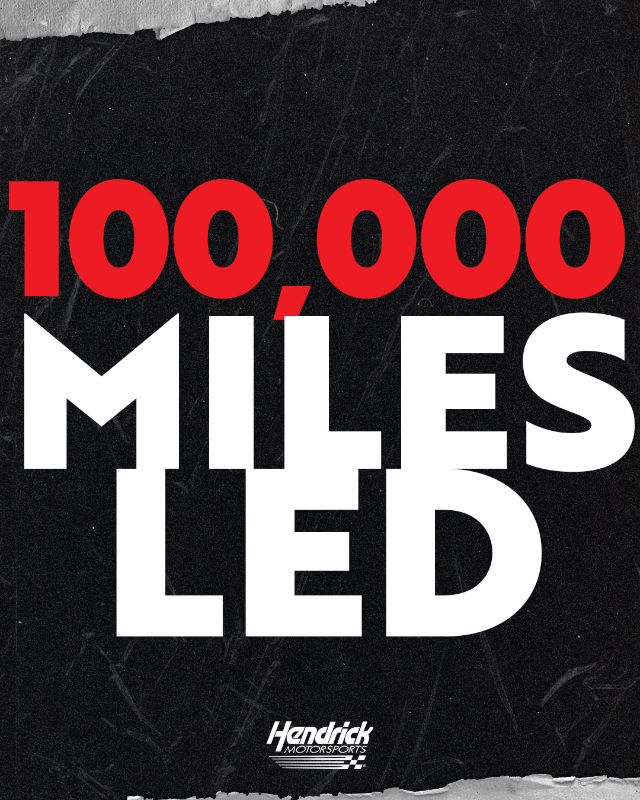 21:37 UTC  With a few laps before the end of Stage 2, Ross Chastain had a spin at Turn 5 while trying to overtake Daniel Suarez for third place. As a result, he lost three positions, sitting in P7 now. 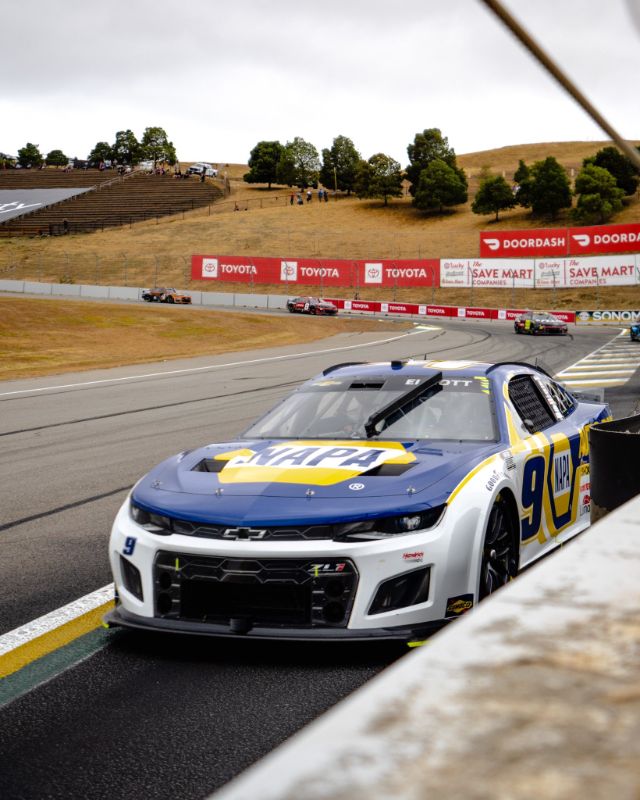 21:32 UTC  With ten laps to go until the end of Stage 2, Chase Elliot opened up a lead of 1.5 seconds over second-place Buescher. Now we expect some strategic moves for cars to pit before the end of the second stage.

21:20 UTC  Chris Buescher and Chase Elliot are running nose to tail at the front of the field. In the last long run, Buescher got the better of Elliot, so let's see if he can do it again.

21:15 UTC  Kyle Larson restarted on 24th, but his pace is not the best. He has trouble with Ty Dillon and Todd Gilliland for P20.

21:10 UTC  In Lap 30, the green flag is back out. The drivers who pitted before the end of Stage 1 are in front, so Chase Elliot is ahead of Chris Buescher.

21:06 UTC  Leaders are now coming to pit road under caution. Four tire stops across the board.

Kyle Busch's crew picks him up two spots to beat Larson and Logano off pit road. 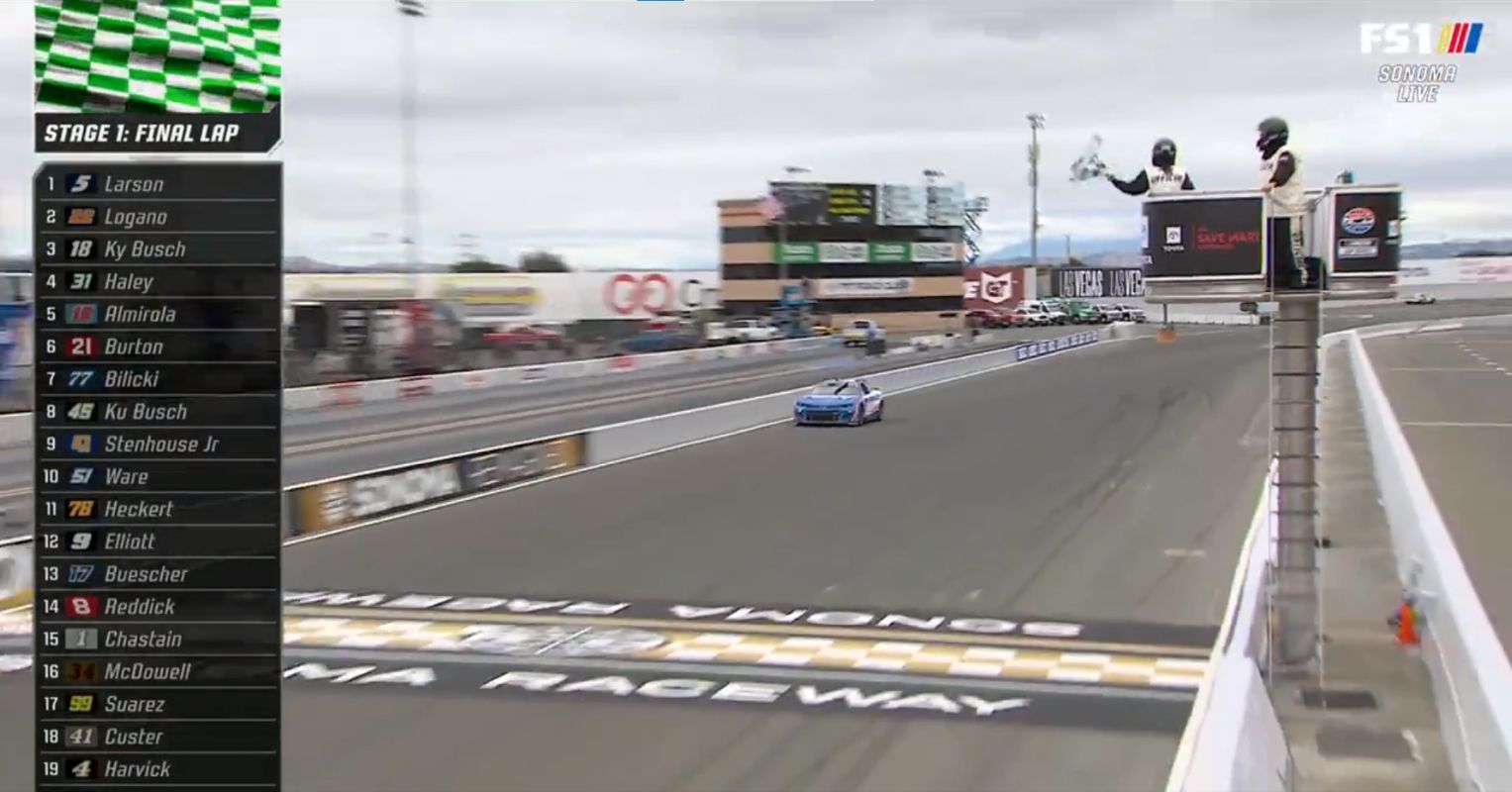 21:04 UTC  At the end of the stage, Denny Hamlin made contact with Ryan Blaney at Turn 5. Hamlin locked his brakes, hitting Blaney in the process.

20:59 UTC  Nothing happened during the last three laps, so Kyle Larson is the winner of Stage 1. 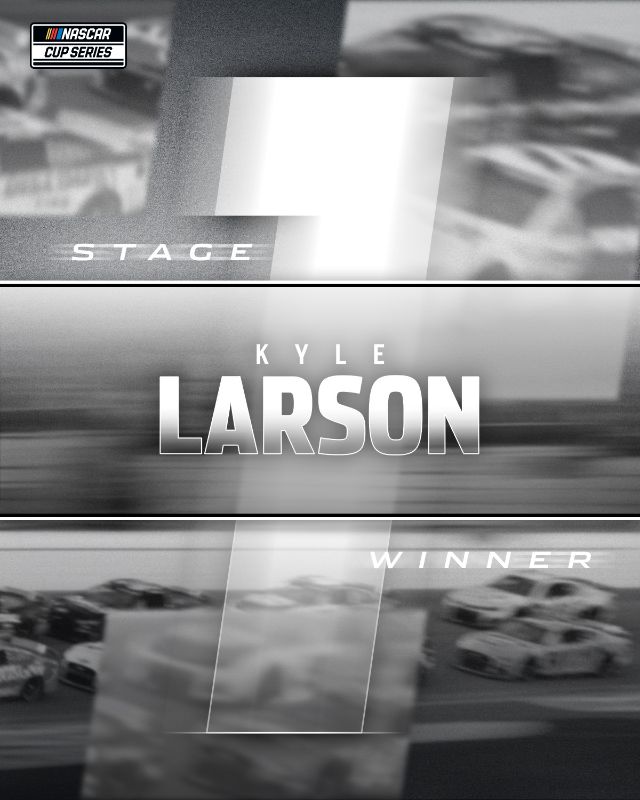 20:57 UTC  With three to go in the Stage 1, a lot of cars came in the pit road. Drivers like Chris Buescher, Chase Elliot, Ros Chastain and others entered the pits. The drivers who stayed out will remain out for the rest of the stage, hoping to make their stop under a caution.

20:55 UTC  Chase Elliot is trying really hard to close the gap from Kyle Larson. However, Chris Buescher was getting closer and closer to Chase and now he made his move on the championship leader. Four seconds are now between Chris and Kyle

20:50 UTC  After the restart, Erik Johnson spun out at the exit of Turn 2, while Kyle Larson is again building a slow but sure gap over Chase Elliot.

20:44 UTC  As reports are saying, Allmendinger's power steering pump has failed. He will have a very long and physical race in California with no power steering.

20:43 UTC  Green flag is back again on Lap 14, and it looks like the entire top 20 stayed out under the caution. Let's see if it was the best decision. Meanwhile, Bubba is frustrated with his engine problem. 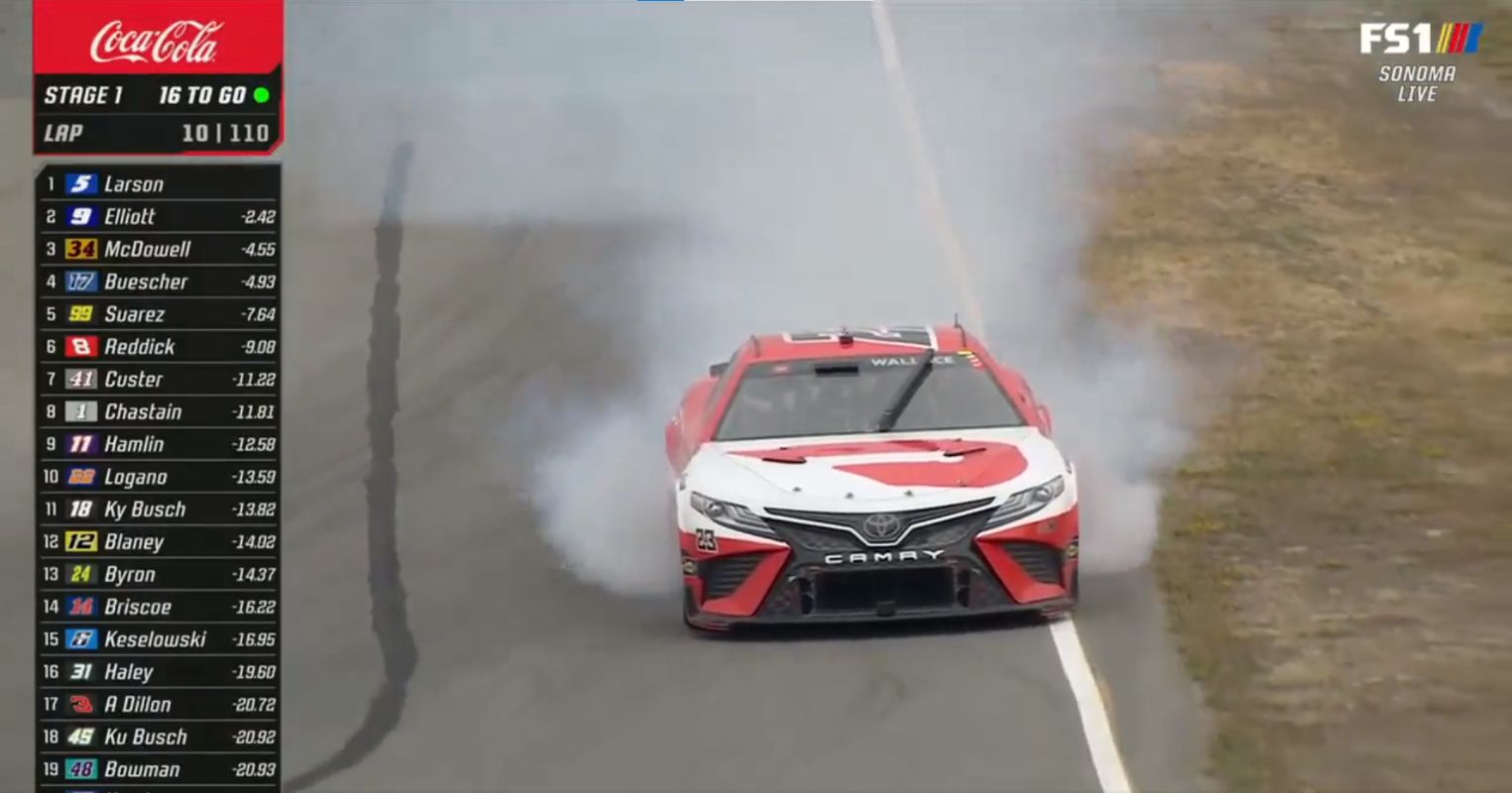 20:42 UTC  While the caution time is still on, the guys from Kaulig Racing went under the hood to continue working on the steering issues. It seems like it is a serious problem. 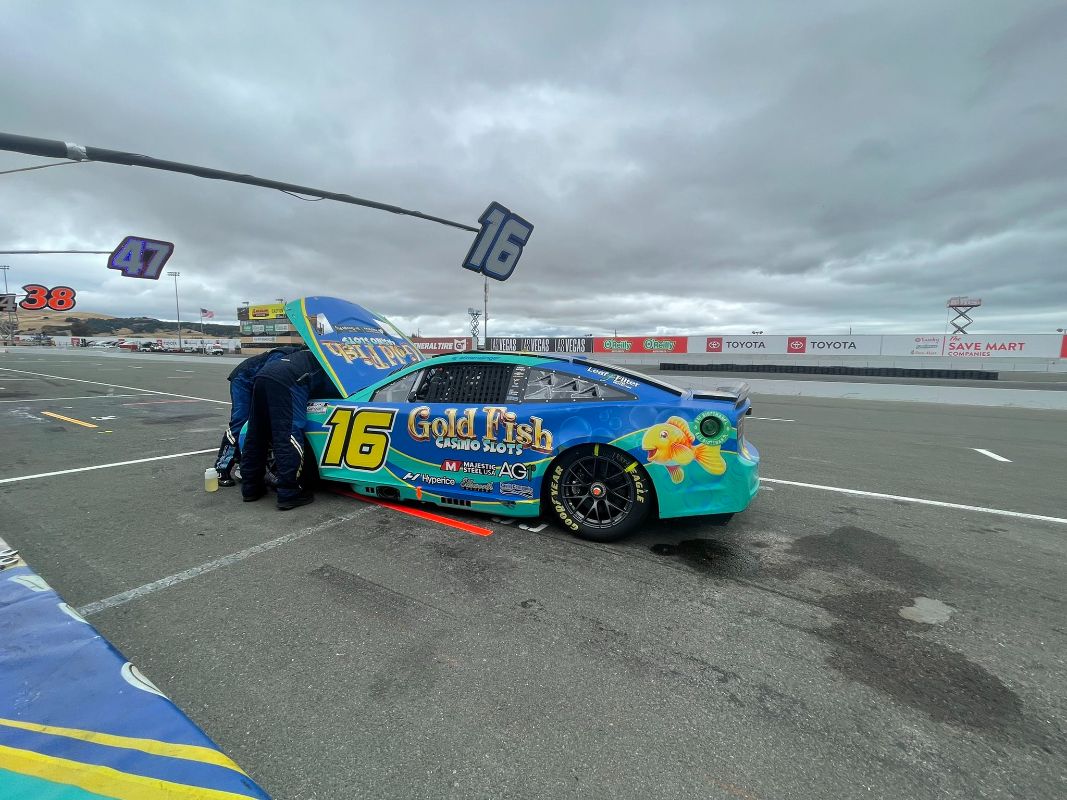 20:37 UTC  The caution brought out by Bubba is an excellent opportunity for some of the guys to take the pit road. Kyle Busch, AJ Allmendinger, and Aric Almirola are among those who make stops under this caution.

20:34 UTC  Caution is out because Bubba Wallace has blown his engine, coming to a stop in Turn 4.

20:33 UTC  While Kyle Larson is getting away from Chase Elliot, Ross Chastain made a pass inside in Turn 11 to overtake Denny Hamlin.

20:31 UTC  AJ Allmendinger had a great start, gaining three places, but it seems like is something wrong with the steering column. In his own words, "The steering feels like it's so stiff and broke".

20:29 UTC  Kyle Larson and Chase Elliot are slowly getting away from the third place, where Michael McDowell is doing his best to stay in touch with the leaders

20:26 UTC  With green lights being out, Kyle Larson and Chase Elliot had equally good starts, but finally, Larson takes the lead from Chase, heading downhill past Turn 2.

20:08 UTC  A rare "incident" is unfolding before the green lights. A cloudy sky over the Sonoma Raceway, something we saw last time in 2013.

20:06 UTC  Before the start of the race, we found out that three cars will be dropping to the back of the grid: Christopher Bell, Erik Jones and AJ Allmendinger because they made unapproved adjustments following practice and qualifying. As a result, they will have to serve a pass through after the green flag.