This Dusty Porsche 911 GT3 Hides a Terrifying Secret, Would You Still Buy It?

Silvian Irimia
The NASCAR Cup Series is heading to the longest concrete oval in the competition. Of course, we are talking about the Nashville Superspeedway, which will host the 2022 Ally 400 race.
7 photos

The 1.333-mile track (2.145 kilometers) was built in 2001, making its debut the following year with Kyle Larson taking the inaugural win. As a fun fact, despite its name, the Nashville Superspeedway isn't actually a superspeed track but an intermediate one.

Kevin Harvick is the driver that loves this type of circuit, and given his recent results and dominance over similar tracks, he can be a real challenger for the race win. Besides, he has top-five finishes in three of the last five Cup Series, so the veteran is on a good run.

Chase Elliot is the championship leader, but because he hasn't run particularly well lately, he is a little bit overshadowed. However, Chase needs just a little spark in order to create something unique so pay attention to him.

While the race unfolds, stay tuned with us to get all the updates and pieces of information. 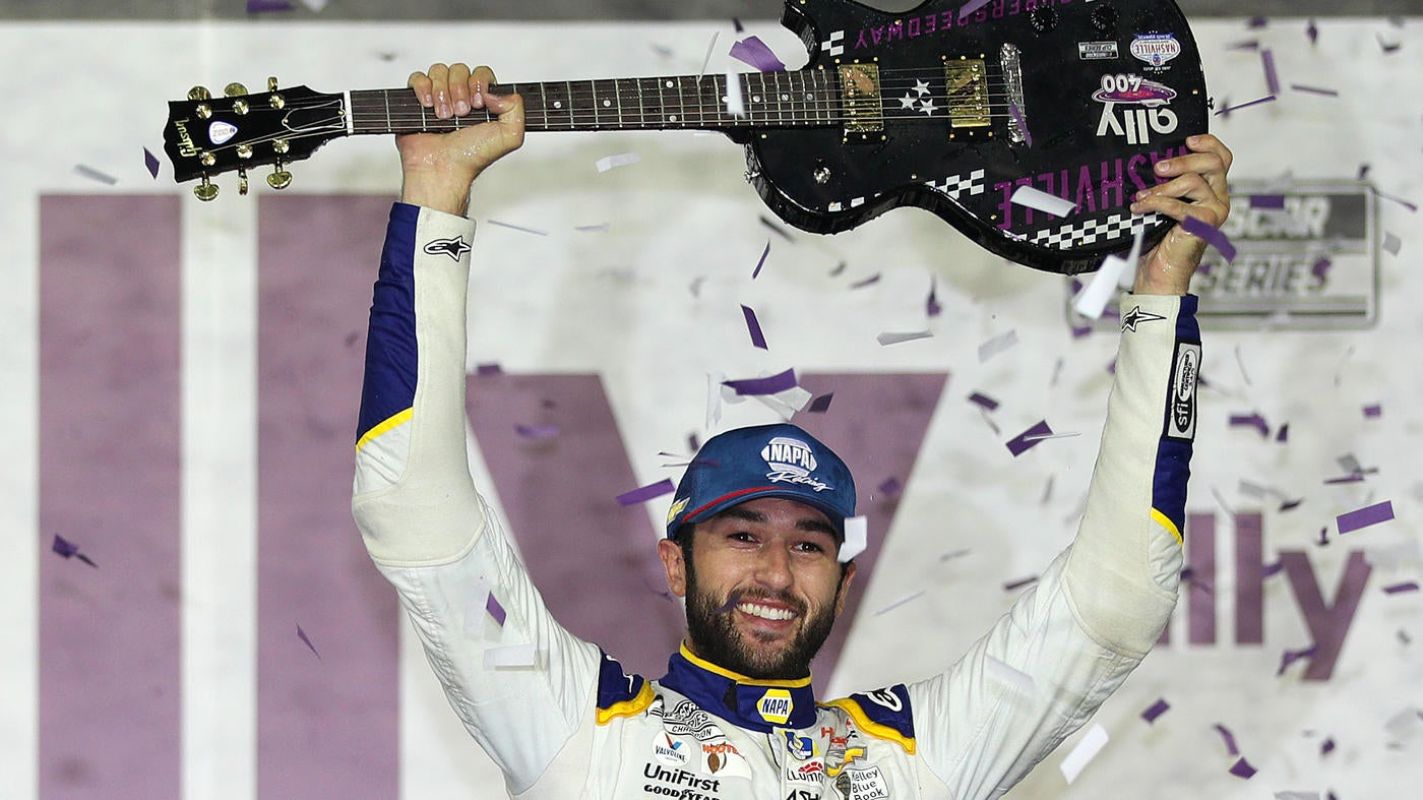 09:03 UTC  Chase Elliot stays on track on the final round of pit stops. As a result, he jumpes ahead of Kyle Busch and with two to go only four tenths of a second separated the two drivers.

00:04 UTC  Every minute the conditions are deteriorating pretty quickly.

00:02 UTC  Another red flag is out for 30 minutes. Because of lightning in the area, fans are asked to clear the grandstands until further notice.

00:00 UTC  With 15 laps away from halfway, rain and lightning are back bringing out the caution.

23:59 UTC  When Denny tried to clear Turex, Kyle Busch closed the gap from them. Hamlin running the middle. Truex down low. Busch up high. Joe Gibbs Racing 1-2-3 for the lead separated by about half a second.

23:57 UTC  Ryan Blaney tries to overtake Martin Truex in Turns 1 and 2 but he can't do it. That helps Denny Hamlin get into the battle and now Hamlin is fighting Truex for the lead once more!

23:56 UTC  Another week, another pit road mistake by Bubba Wallace's crew: Loose wheels have been a constant for that crew. Bubba is very angry with his team.

Meanwhile, Chase Elliott's team was taking an extra look at the right rear wheel well under this yellow.

23:30 UTC  Ryan Blaney is now in second place, chasing Martin. Meanwhile, the two of them have driven away from everyone.

23:29 UTC  Joey Logano time in the lead is cut short because Martin Truex Jr. gets to his outside and power passes to take the lead back.

23:28 UTC  Green flag is out at Lap 97 and we are curios to see how Joey Logano two tire strategy works. Meanwhile, Aric Almirola has a pit road speeding penalty. 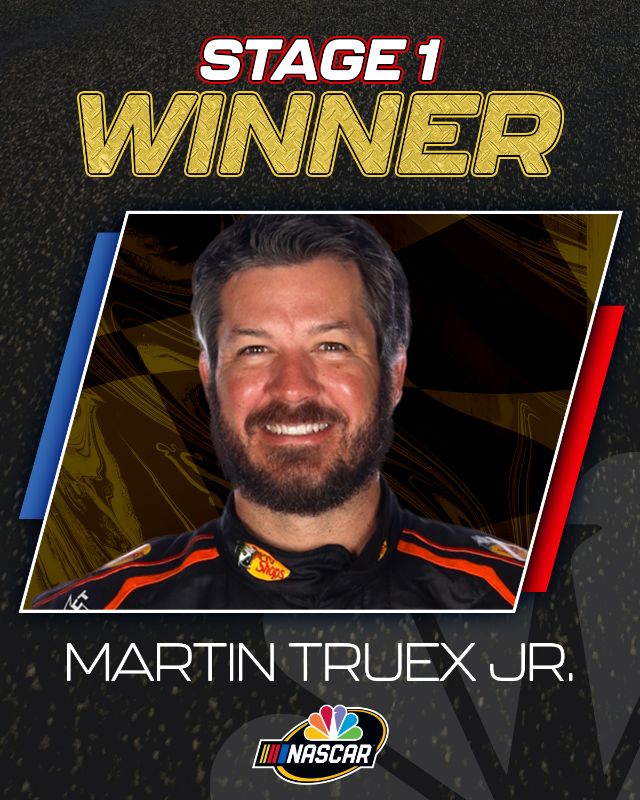 23:14 UTC  With two to go, the battle between the two leaders is as intense as possible.

23:13 UTC  Hamlin is all over the back of Martin Truex, but he is not able to overtake him.

23:11 UTC  After falling badly off the pace, Chase Briscoe is taking his car to the garage. Meanwhile Denny Hamlin is in striking distance of taking the lead back from Truex Jr. with less than ten to go in Stage 1.

23:07 UTC  Daniel Suarez "lost his talent" during the red flag period. After Bubba Wallace and Kyle Busch have powered past him, he has fallen back from P2 not too long ago to now outside the Top 10.

23:03 UTC  WIth about 20 to go in Stage 1, Martin Truex Jr. overtakes race leader Denny Hamlin on the high side. First lead change of the day.

23:00 UTC  Corey LaJoie gets the free pass under this caution. At the same time, Joey Logano and Brad Keselowski are in the pits as well.

22:57 UTC  Another caution is out because Ty Dillon and Chase Briscoe have crashed in Turn 2.

22:56 UTC  Alex Bowman has taken his car to the garage. His race is over so soon.

22:55 UTC  Chase Elliot is involved in another close call. He makes contact with Christopher Bell coming down the frontstretch.

22:55 UTC  Green flag is back out at Lap 56 after Bowman incident. Daniel Suarez has a new challenger for second, as Kevin Harvick sticks a nose under the No. 99 before getting passed on the outside by Martin Truex.

22:53 UTC  William Byron says that the steering rack broke on his car. At the same time, Alex Bowman's team is trying to repair his car on the pit road.

22:47 UTC  William Byron's issues are much more serious than a cute tire. He's been told to go to the garage.

22:46 UTC  The caution is out once again. Hendrick Motorsports driver Alex Bowman has crashed in Turn 1.

22:46 UTC  Four-wide into a turn will never work. William Byron and Chase Elliott made contact and it looks like Byron cut a tire after being a little to ambitious.

22:44 UTC  Ross Chastain is back into the pits after a mistake made by his team. They realized they left a wheel loose and they had to make sure they got it tightened back up. Chastain lost some precious time.

22:42 UTC  Meanwhile, the race leaders come to the pitstops for the first stops of the day. Denny Hamlin edges out Suarez (P2) to win the race off pit road. As a result, he is still the leader.

22:40 UTC  After exactly one hour and 27 minutes we are back with racing action. Cole Custer got the free pass under this caution and will get back on the lead lap.

22:37 UTC  Engines re-fired here at Nashville after a long break. Be patient because we're about to go racing again.

22:34 UTC  NASCAR officials have given the all-clear for drivers to head back to their cars. This race will resume shortly.

22:22 UTC  Rain has stayed away and potentially could not hit the track. We may get started again soon.

22:06 UTC  Another lightning strike in the area, meaning this delay won't end anytime soon. Meanwhile, the fans are asked to clear the grandstands until further notice.

21:55 UTC  With the conditions not looking any better, everyone is heading back to the infield in order to seek shelter.

21:52 UTC  There has been another lightning strike in the area, so the delay has been extended and everyone is headed back to the infield to seek shelter. These are the current conditions at the track.

21:43 UTC  Josh Bilicki's issue was a loss of fuel pressure. Seems like it came back just before the red flag came out.

21:39 UTC  The race is red flagged for at least 30 minutes because there has been a lightning strike within seven miles of the racetrack. 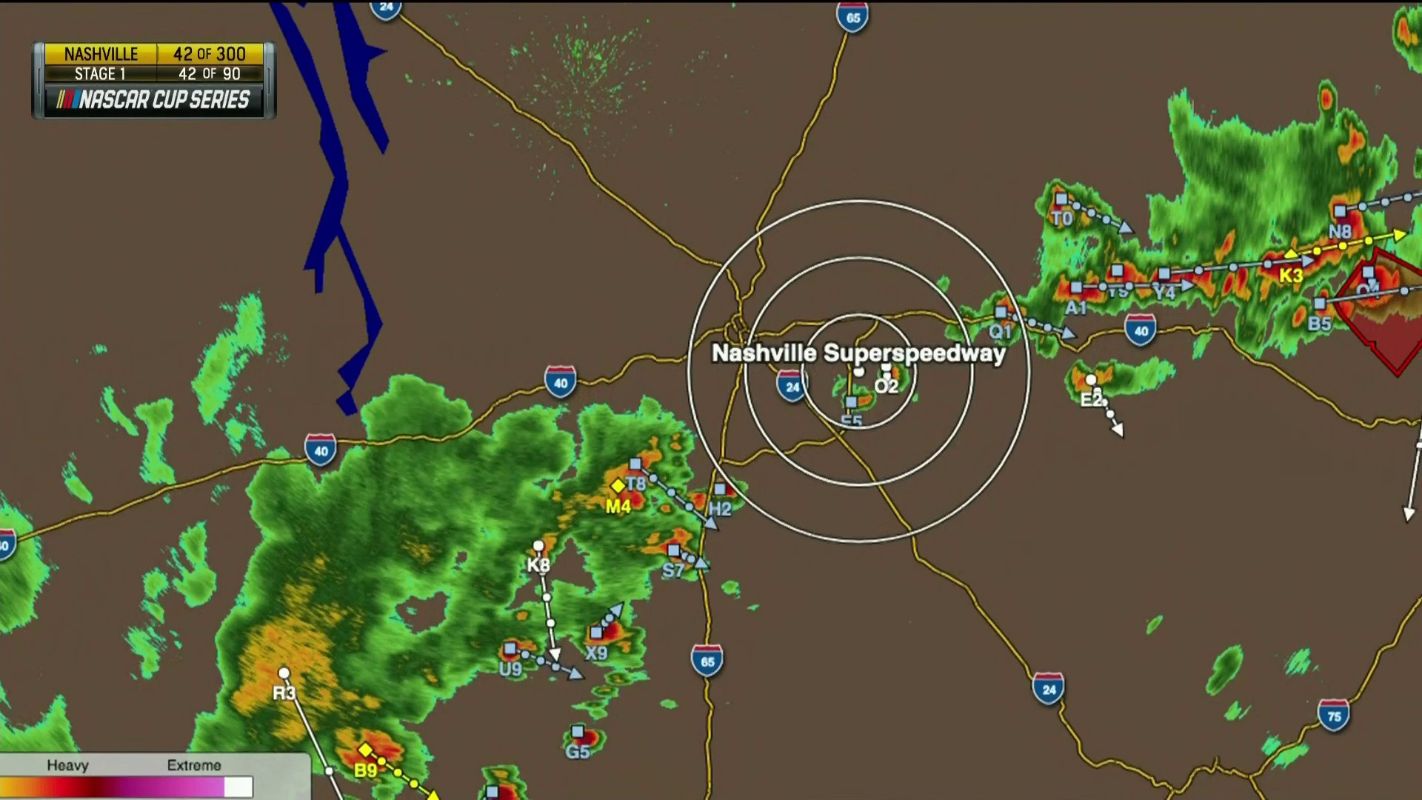 21:37 UTC  Josh Bilicki has fallen off the pace and apparently there may be some debris from his car. As a result, the first caution of the day is out.

21:24 UTC  While Kyle Busch is overtaking everything ahead of him, Daniel Suarez takes notes and has taken second from Kyle Larson.

21:23 UTC  Kyle Busch is continuing his excellent run, and now he finds himself in P17, ready to take on the front guys.

21:21 UTC  The one who started from pole ( Denny Hamlin) has opened up his lead to almost three seconds over Kyle Larson.

21:19 UTC  Joey Logano has a terrible start of the race falling to P6 after being overtaken by Christopher Bell.

21:18 UTC  While Daniel Suarez has taking third place, Kyle Busch is a man on a mission. He has gained 11 spots in ten laps since starting from the back. 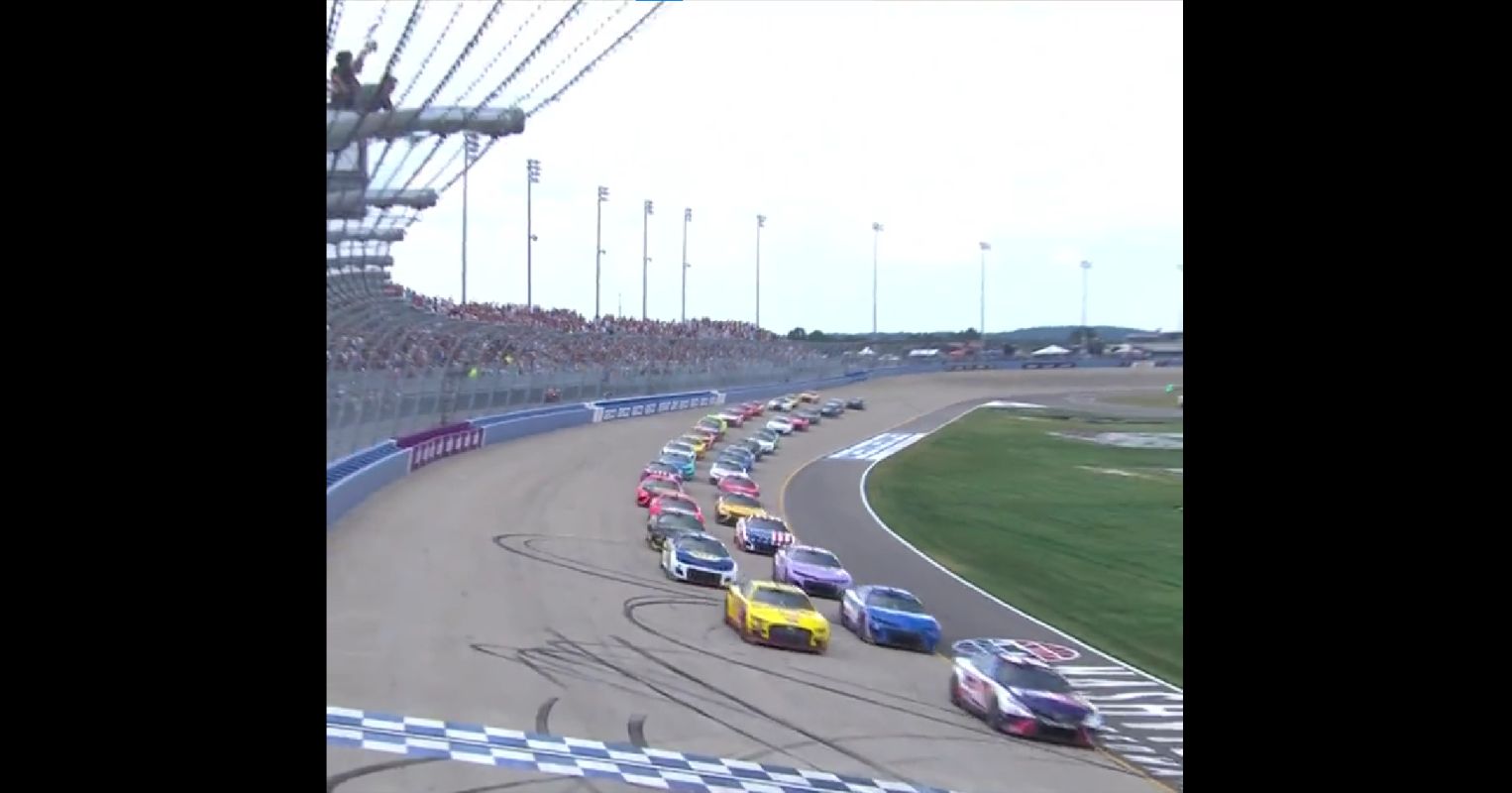 21:15 UTC  For the 24th place the battle is on. Daytona winner Austin Cindric is having an intense fight with Ty Dillon, Correy LaJoie and some other drivers. Is a crash coming?

21:13 UTC  The track is under overcast skies for the moment.

21:12 UTC  Green flag is out and we are racing in Nashville. Denny Hamlin leads the first lap while Kyle Larson overtakes Logano for second place.

21:10 UTC  With most of the rain staying west and south, a new cell dip pop up near the track. Can you see another session full of rain?

21:05 UTC  Qualifying for yesterday's race was rain-shortened as a summer storm came in and doused the racetrack before the final round of qualifying began. However, Denny Hamlin held it together to get the pole for the race, followed by Joey Logano, Kyle Larson, Chase Elliot, and Daniel Suarez.