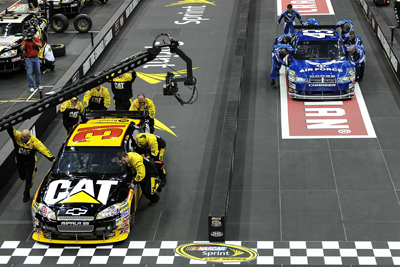 It seems the world-spread swine flu has made its way into motor racing, as it was reported by the NASCAR official site that a member of the Richard Childress Racing organization is currently recovering from complications created by the H1N1 virus.

Pit crew member Donald "D.J." Richardson is on a hospital bed in Massachusetts after contracting the H1N1 virus during his visit back home to the aforementioned state during the Thanksgiving holidays.

37-year old Richardson, of Leominster (Mass), was immediately admitted to the Health Alliance Hospital hospital's intensive care unit with acute respiratory distress syndrome. He initially reported to the hospital after contracting the virus, but his medical situation worsened due to the onset of pneumonia.

The doctors are yet to give a definitive verdict on his medical condition, as he is currently being supervised by the medical staff for keeping him as stable as possible.

“Our thoughts and prayers are with D.J. and his family during this very trying time. All of us at Richard Childress Racing and Earnhardt-Childress Racing Engines wish him a full and speedy recovery,” said Mike Dillon, RCR's vice president of competition.

Richardson has been rear tire changer for Richard Childress Racing in the Sprint Cup Series throughout the 2009 season, following past jobs with Penske Racing, Hendrick Motorsports, Braun Racing and Andy Petree Racing.