1 Shoot for the Moon With Your Very Own 1969 NASA Saturn V Rocket: Powered by CO2 Cartridges

3 Advanced Gemini: The Little Known Spacecraft Concept That Could Have Outshined Apollo

4 This NASA Spacecraft Could Have Put Americans on the Moon in 2018, But Congress Stepped In

5 NASA's Space Launch System Almost Never Got Off the Ground, Here's Its Wild Story
Car video reviews:
Up Next

Gravity is one of those things without which life as we know it here on Earth could not have existed. Described by science as the force by which a planet or other body draws objects toward its center, and born out of Earth’s rotational spin, our planet’s gravity influences everything from how tall we are to how high we can build stuff, or how far can we jump.

Important to know is that gravity is not the same everywhere. The Moon, for instance, pulls things down with a sixth of Earth’s power, Mars uses just 38 percent of the same force, while Jupiter, the biggest planet in Sol, is 2.4 times more powerful - but would have been much more so if it weren’t all made of gas. Almost.

In between these bodies, and every other one out there, there’s the vastness of space, the place where astronauts and their spaceships encounter weightlessness. It’s a state that cannot be easily replicated on the surface of a planet, but has to, if we are to properly train astronauts.

There are basically two ways to get people acquainted with zero-G: either launch them into freefall in an airplane, something that lasts for just a few seconds, or submerge them underwater, where buoyancy comes close enough to a simulated zero-G environment.

Back in 1995, at a time when the world was preparing to launch the first modules of the International Space Station (ISS) and open the doors to a large number of spacewalks, the Neutral Buoyancy Lab (NBL) was created at the Sonny Carter Training Facility, close to the Johnson Space Center in Houston, Texas.

Tracing its roots back to the tanks NASA used to train the Apollo astronauts and others, the NBL is a massive pool that can fit 6.2 million gallons (over 28 million liters) of water. If it were Gatorade, and not water, it would have been enough, NASA jokes, to suit the needs of all NFL players for 13 seasons.

The stated mission of the NBL is to train astronauts for spacewalks, but also to develop flight procedures, and verify hardware compatibility. To do that, it needs more than just a pool filled with water.

This is why the place also comes with two overhead bridge cranes, each good to lift up to ten tons, and four jib cranes good for 1.6 tons each – these ones are also the ones that lower and lift astronauts into and from the water. Several voice communication systems are also in place, as well as a hyperbaric chamber and to treat potential decompression sickness.

According to NASA, going underwater is the best way to train people for work in space, but it’s far from perfect. Although it does a decent job at simulating zero-G thanks to neutral buoyancy (the tendency of an object to both float and sink), astronauts are not really weightless, and they do feel their weight. Also, being under means astronauts have to defeat water drag, and that can impact the way they use tools in space, where they do not have to that.

All in all, this way of doing things might seem like low-tech, but it’s really the only suitable way that we know of to train astronauts for space. After all, NASA itself recognized it as such and, more importantly, it was unable to come up with something better.

So, the next time you go for a swim, you might as well imagine you’re floating through space… 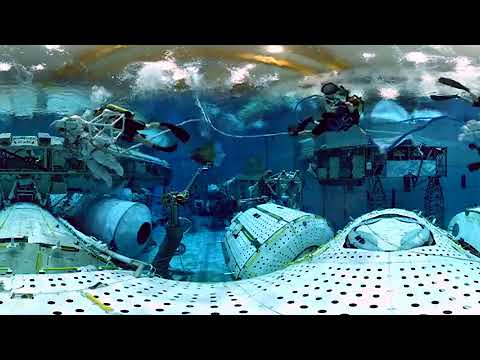