3 NASA Shoots DART at Distant Didymos Asteroid, Impact in Less Than a Year

NASA’s Bombing an Asteroid on September 26, We’re Promised No Threat to Earth

Back in November 2021, the long-awaited Double Asteroid Redirection Test mission took off from Vandenberg Space Force Base in California on top of a SpaceX Falcon 9 rocket. DART for short, the mission is humanity’s first attempt at altering the course of an asteroid.
6 photos

That’s something science-fiction writers have long dreamed about, but in the real world, it marks the first and perhaps the most important step towards a truly effective defense network against asteroids.

DART has been on the road, sort of speak, for ten months now, and it’ll reach its target, a binary asteroid called Didymos, on September 26. Or should we say impact its target?

Because it’s not massive, the spacecraft will probably only nudge the asteroid a bit. Scientists here on Earth expect the small rock to register a change in speed around the main body of a fraction of one percent, which would eventually translate into a change in the orbital period of several minutes.

That may not seem like much, but the change will be visible from here on Earth with specialized gear and will prove asteroids can be sent on other paths if they threaten Earth. As a side note, Didymos will be at the time of the impact 6.8 million miles (almost 11 million km) away from our planet, so whatever we do to it will not pose a threat to us in the immediate future, as per NASA.

The space agency announced this week the impact would take place on September 26 at 7:14 p.m. EDT. A simulation of how it's supposed to go can be seen in the video below. 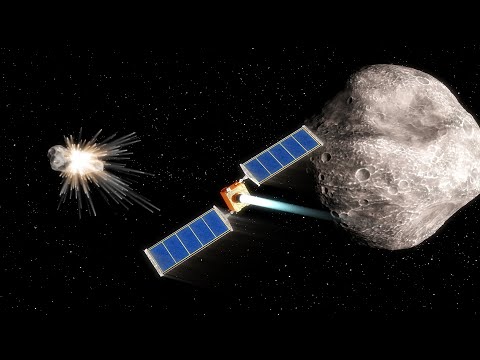