2 SLS Rocket Has Fire Running Through Its Veins, Animation Shows

5 Rockets and Spacecraft That Will Take Humans to the Moon Travel by Train
Car video reviews:
Up Next

Later this year, the first flight of humanity’s second Moon exploration program will take off. Artemis I is how it’s called, and it will be a dry run to the Moon to test performance, life support, and communication capabilities. Under the microscope will be both the Space Launch System (SLS) rocket and the Orion capsule that will eventually transport humans into space.
1 photo
With the deadline close, NASA can afford to waste no time. In mid-December, the agency conducted the seventh test of the SLS core stage at the at Stennis Space Center in Mississippi, loading for the first time cryogenic liquid propellant into the rocket’s two tanks.

And now the agency is getting ready for the mother of all tests, a hot fire exercise that will see all four of the core stage’s RS-25 engines being fired up and burned for up to eight minutes, simulating an actual launch. The plan is to run the test somewhere on or around January 17.

“The next few days are critical in preparing the Artemis I rocket stage, the B-2 Test Stand at NASA’s Stennis Space Center, and the test team for the finale of the Green Run test series,” said in a statement Barry Robinson, project manager for SLS core stage Green Run testing at Stennis.

“The upcoming Green Run hot fire test is the culmination of a lot of hard work by this team as we approach a key milestone event for NASA’s Artemis missions.”

The core stage of the SLS is the one that will do the heavy lifting as the Artemis missions will fight off Earth’s gravity. In itself, it is made up of the fuel tanks and four RS-25 engines. Together with the two boosters that will be strapped on the core stage, the SLS will develop 8.8 million pounds of thrust during launch, which is about as much as 160,000 Corvette engines would pump out if they were somehow strapped together and made to work in sync. 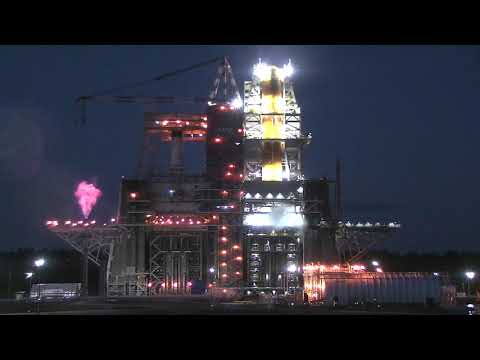