1 NASA Delays Mission to the Sun

Driver Plows Into Horse and Rider in Very British Accident

NASA Mission to The Sun Getting Ready For Launch

Following a delayed launch of the Parker Solar Probe in mid-June, NASA said on Tuesday the mission is on track for a possible launch next week.
1 photo
To leave Earth onboard a United Launch Alliance Delta IV Heavy rocket, the solar probe has just cleared the final procedures in the clean room. It will now be moved to the launch pad inside its 62.7-foot tall fairing.

This mission is one of NASA’s most important when it comes to studying the sun. Parker will travel through the Sun’s atmosphere, at a proximity never achieved before by any other man-made spacecraft.

This would allow the first ever close study of a star, and the probe’s approach is dubbed by the American space agency humanity’s first visit to a star. It will come within 4 million miles of the sun's surface, a distance that at first glance seems to be enough to keep it safe.

But NASA says that the distance is enough to make the probe face “heat and radiation like no spacecraft before it.” To survive, it has been fitted with a cutting-edge Thermal Protection System (TPS).

The heat shield weighs about 160 pounds and has a foam core made of 97 percent air. The foam sits between two panels of superheated carbon-carbon composite, sprayed on the sun-facing side with a specially formulated white coating.

The mission of the Parker probe is to study our sun’s corona and see how it can affect Earth and other worlds as per the provisions of the Living with a Star Program (or LWS) run by NASA.

The Parker Solar Probe was created by the Johns Hopkins Applied Physics Laboratory, which will also operate the spacecraft during its projected mission. 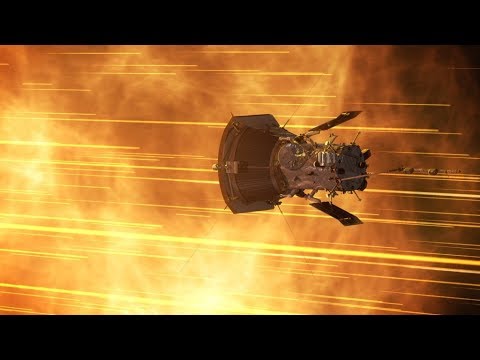