5 NASA InSight Takes its First Selfie on Mars
Car video reviews:
Up Next

NASA Is Slamming Spacecraft to the Ground for a Good Reason

Snatching chunks out of an alien world is no easy task. And safely carrying them on a 40 million-mile (55 million-km) journey is even harder. So to ensure that everything will go accordingly, NASA has begun testing spacecraft prototypes by dropping them to the ground, simulating a lander’s contact with the Martian soil.
6 photos

NASA’s Perseverance rover touched down on Mars back in February to search for ancient microbial life. To get its job done, the rover has inside its belly 43 sample tubes. Out of them, four have already been filled with rock cores collected recently.

The Mars Sample Return mission, which will include numerous partners and space agencies, aims to bring select tubes back to Earth so that scientists can investigate them with advanced lab equipment that would be too big to carry to the Red Planet.

For the mission, the European Space Agency (ESA) will develop a rover that will take the samples to a NASA-designed lander. The lander will store the samples in a rocket called the Mars Ascent Vehicle using its robotic arm.

In order to carry the rocket, the lander will have to be able to withstand its weight and the landing impact. The spacecraft wouldn’t have a jet pack like Perseverance did when it first landed on the Red Planet. Therefore, its legs would have to absorb the impact of touchdown, helped by retrorockets, which will slow down its descent.

To see how its legs would hold up against the shock, NASA engineer Pavlina Karafillis has repeatedly been slamming a prototype to the ground. Slow-motion video is used by the researchers to better understand how energy would be distributed throughout the spacecraft.

“The last step of the journey is really important,” Karafillis said. “There’s all kinds of landing conditions you have to take into account, like rocks, or really soft sand, or coming in at an angle. This is why we have to do all this testing.”

Since the team is still in the beginning phase of the project, Karafillis and her colleagues started with a prototype that is smaller than the one which will be used for the Mars Sample Return mission. The lander is used as a learning tool to help understand how gravity affects the vehicle. In the future, they intend to test a full-scale lander. 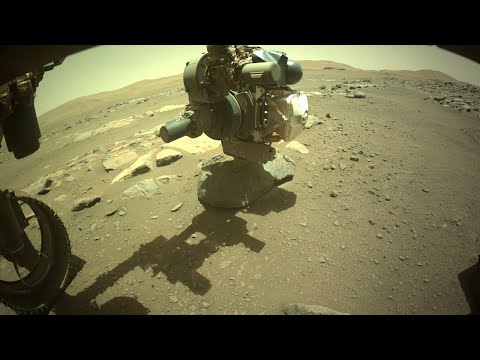