5 NASA InSight Looks Like a Spec of Metal in the Martian Reddish Dust
Car video reviews:
Up Next

One of the reasons the InSight lander was sent to Mars is to measure the ground motions of the planet as a means to better understand inner workings. In the beginning of April, the mission officially began as the machine scored a hit.
1 photo
NASA said this week that InSIght was able to detect a trembling in the ground on April 6, on the 128th day of the mission, using the Seismic Experiment for Interior Structure (SEIS) instrument specifically created for the task.

Despite the tremor being “too small to provide solid data on the Martian interior” the moment marks an important premiere for human space exploration: it is the first time in history we can experience quakes on the neighboring planet.

"We've been collecting background noise up until now, but this first event officially kicks off a new field: Martian seismology!"

NASA released a video of the event it calls a “likely marsquake,” complete with audio. The audio diagram brings to our planet the sound of the Martian wind, the quake itself and the movement of the lander’s robotic arm as it gets into position to take some pictures.

SEIS, the instrument used to detect the tremor, uses three sensitive pendulums fitted with a motor-driven equilibrating system and special thermal compensation mechanism, all enclosed in a sphere.

The motion of the pendulums is calculated electronically, including with the use of a feedback mechanism.

Since it landed on Mars months ago, InSight managed to impress by providing Earth with rarely available information. Since February, the lander has consistently sent back data about Martian weather on a daily basis, and it even managed to capture a 27 seconds eclipse as Mars’ satellite Phobos passed in front of the Sun. 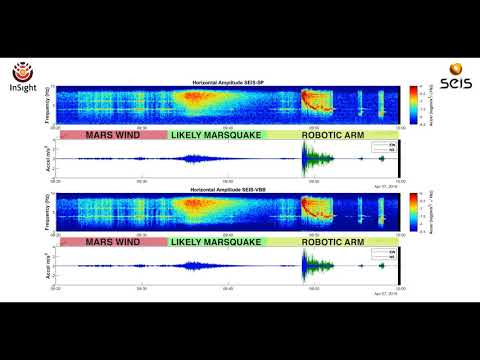