1 NASA Going for the Sun with Fastest Spacecraft in History

2 NASA Mission to The Sun Getting Ready For Launch

3 NASA Delays Mission to the Sun

Launched on August 12 from Space Launch Complex-37 at Cape Canaveral, the Parker Solar Probe, the fastest spaceship to date is currently en route to the Sun, with the goal of shedding some more light on humanity’s star.
1 photo
In an attempt to show the world what exactly a trip to the sun implies, NASA’s Goddard Flight Center released a video prior to the launch, showing how in fact the probe will not go towards the sun in a straight line, but would circle around it until it gets close enough to conduct its research.

The reason for this is the fact that any spacecraft that launches from Earth is affected by the planet’s lateral motion. As it spins around the sun, Earth is traveling at about 67,000 miles per hour (107,800 km/h), almost entirely sideways relative to the Sun. This actually means that anything we shoot straight at the Sun will miss it by millions of miles.

To cancel the lateral motion it inherits from the home planet, NASA launched the Parker Solar Probe on a flyby route towards Venus. The neighboring planet will act as a brake of sorts, providing gravity assist in accelerating the probe forward and decelerating it laterally.

“Parker Solar Probe will perform seven Venus gravity assists over its seven-year mission to shed sideways speed into Venus' well of orbital energy,” explains NASA in the video below.

“These gravity assists will draw Parker Solar Probe's orbit closer to the Sun for a record approach of just 3.83 million miles from the Sun's visible surface on the final orbits.”

The goal of the mission is to allow Earth scientists to better predict space weather events. The probe will allow this by flying through the Sun’s atmosphere, at a proximity never achieved before by any other man-made spacecraft, 3.8 million miles away from the sun's surface. It will take the probe seven-years to complete its mission. 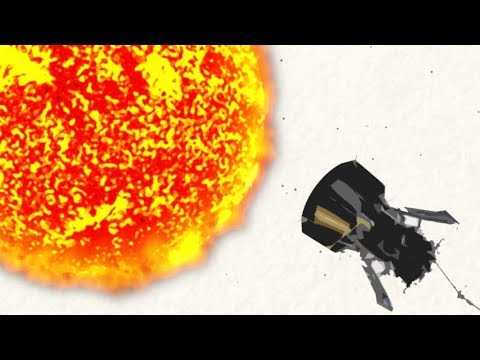