2 Elephants Don’t Really Mix With Rockets. Still, Here’s How Many Would Fit in One

Home > News > Space Junk
Daniel Patrascu
Historically, the Saturn V rocket will forever be remembered as the backbone of the Apollo program of the 1960s and 1970s, the American effort that put humans on the Moon for the first time. The thing was officially a super heavy-lift launch vehicle, capable of developing 7,891,000 lbf (35,100 kN) of thrust and giving a serious nudge to the nine missions we ended up landing under Apollo all the way on the Moon.
11 photos

The rocket was the result of work conducted by a number of companies, including Boeing, North American Aviation, Douglas Aircraft Company, and IBM. It is to this day, despite the efforts made by NASA, SpaceX, and others, the only one ever to have been capable of taking humans beyond low Earth orbit.

Had history played out any different, the world would probably have had a series of other, equally potent (or even more so) rockets, advancing our conquest of the solar system. After all, the Saturn V companies mentioned above, and others, did come up with a large variety of concepts that never got made.

One of them is the Saturn V-4X(U), a Boeing design powered by four core Saturn V engines and that should have been capable of carrying into space no less than one million pounds (over 450,000 kg) worth of payload.

For reasons that are lost to history, though, the V-4X(U) never got to be made, so one got to see it fly, ever. Thanks to modern technology, and an animation specialist called Hazegrayart, we can see the mutated Saturn take flight for the first time in an animation video published earlier in June and available below. 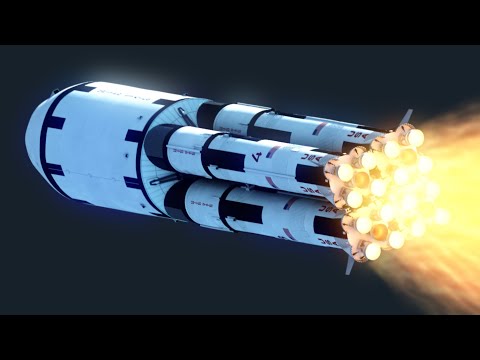