The three-way battle doesn't even start, and you only have Ford Canada to blame for that. We're not going to tell you what to do about it but suffice to say they have an email address, and you have a keyboard and an internet connection. Just kidding, they already know what they did was wrong.
8 photos

Anyone who's worked in the automotive journalism industry knows it's pretty difficult to get hold of two cars for a head-to-head review, let alone three. And when those three are special, track-oriented, limited editions of their respective models, the odds of it happening go through the floor.

You can only imagine, then, how excited James and Thomas must have been when they managed to book a Ford Mustang Mach 1, a Honda Civic Type R LE, and a BMW M2 CS, all for the same period. They would make a cool presentation video for all three of them (which they did) and then take them around the private track they use for testing purposes to see which sets the quickest lap time.

Who wouldn't have liked to see that? Well, apparently, Ford Canada lent them the test car but told them they shouldn't do any of the following: drive around a track, do burnouts, drag race, or just do any sort of performance driving whatsoever. And that's in a 460-hp Mustang that takes parts from the Bullitt and the two Shelby brothers—the GT350 and GT500—to make the best Mustang (that isn't a Shelby) you could possibly take at a track day. It's like giving a kid ice cream and telling them they can only smell it, not eat it.

Luckily for them, they still had two cars to play with, and they both offered plenty of excitement. At least in theory. One is the Honda Civic Type R LE (Limited Edition), a slightly more extreme and track-focused (you'll hear a lot of that in this text) version of the Japanese hot hatch of which only 1,200 units have been built. It doesn't have more power than the common Type R version, but it's lighter (about 50 lbs/22 kg) thanks to less sound deadening, but also a set of forged BBS wheels.

However, the LE gets one more update that turns out to be its Achilles's heel. It has new software for its adaptive dampers, making the ride way too stiff for anything other than perfectly smooth asphalt in +R mode. That effectively hampers its performance as the Civic spends way too much gliding about instead of being firmly planted on the track. Put it in anything other than the +R mode, and the car will limit the power output. It's a dead-end that has only one solution: finding a track with a less bumpy surface.

Luckily for them, they also have just the perfect car for the occasion. It's the BMW M2 CS, the more extreme version of the tiny Bavarian coupe that always seems to get so much praise. Well, the CS makes no exception, and after just a few laps, Thomas even goes as far as calling it "the best sports car in the world." Hot lap, hot head? Considering the lap time it set, we'd say he's fully entitled to that opinion.

After the Mach 1 disappointment and the Type R LE semi-failure, the M2 CS's performance must have come as a welcome revelation to save the day. With BMW confirming the next 2 Series Coupe will continue to keep its RWD architecture, we have every reason to believe the new M2 will be just as good, if not better—though Thomas seems to doubt the latter is even possible. 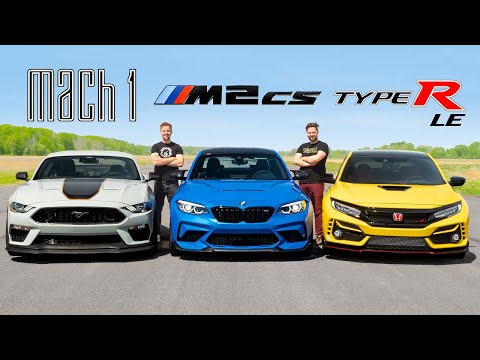