3 1969 Ford Mustang Hides Strange V8, Sounds Like Anarchy With a Side of Sacrilege

Mustang GT Has a Supercharger the Size of a GT-R Engine, Puts Down Insane Power

This 2019 Ford Mustang GT is the reason why you should never make assumptions about your opponents. Because you might be rolling around in your brand new Shelby GT500, thinking that you're nearly invincible. And the moment this GT starts flexing is the moment you'll realize you have no chance of keeping up, at least not if we're talking about straight-line performance only.
10 photos

We've recently had a look at another exciting Mustang that was measured at Palm Beach Dyno. The twin-turbo Shelby GT500 went all the way up to 1,252 horsepower and 867 lb-ft (1,175 Nm) of torque, and that may very well mean it's one of the most potent GT500s on the planet. But this time around, we're looking at a black, 2019 Ford Mustang GT, that immediately reveals its potential, if you'll notice the rear parachute.

It even has Kirkey seats, a roll cage, and racing harnesses, so there's no doubt in mind that this car gets driven properly. And all that even before you get to see the car in action. The owner, Terry, used to have a 3.0-liter Whipple supercharger on this thing, and with that setup, he managed to get a low-9-seconds quarter-mile (402 meters) run at FL2K. But that was all it took for him to get addicted to racing, and we all know how things spiral down from there.

There's an RPG engine under the hood of this GT right now, and it looks like one of these can set you back as much as $10,550 if we're talking about the top-of-the-line version. RPG Racing Engines will take six weeks to build an engine like that, but the good news is that it's rated for 1,500 horsepower. Add the fact that the old supercharger was replaced by a bigger, 3.8-liter unit, and you can already imagine what the result of the dyno run is going to be.

To keep up with all the performance upgrades, Terry is using a Rarefab 1500R 10-speed automatic gearbox, which should be solid enough for the given application. The standard 10R80 wasn't half bad either, but that's only safe for up to about 1,000 horsepower. Going on the dyno, the microphone used to record the sound just can't deal with the noise this thing is making, just another testament to what it can do, even before we see the dyno chart.

That means that this GT is going for another session, with a new 3.5" pulley on it this time. Thundering: that's the only way you can describe this car when it's engaged in a wide-open throttle pull. Right off the bat after the pulley switch, the dyno chart reveals an output of 1,306 horsepower and 908 lb-ft (669 Nm) of torque.

And that's backed up by a second very similar run. This is the kind of power that could even scare some Bugatti and Koenigsegg owners, and it will be interesting to watch if this GT can now get at least a high-8-second run at the strip. 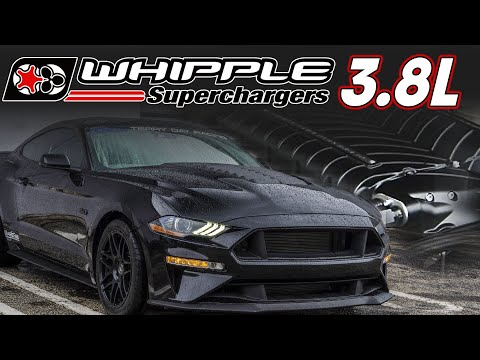