5 Steeda's N/A Ford Mustang GT Meets Demon at the Strip, Gets Into 9.7-Second Mood
Up Next

Aurel Niculescu
Much of the Northern Hemisphere is engaged in battle with winter, but that doesn’t mean we can’t look back to some of the highlights of 2020 that will forever remain in our memory. For the drag racing aficionado, the Haltech Hail Mary Derby easily qualifies into the best-off pantheon of last year, and there's fun to be had by revisiting its highlights.
21 photos

Because we always favor the safety of official quarter-mile track battles, we have been on the lookout for interesting footage ever since 2021 kicked in. For example, that’s how we encountered the “Latina Driven” Ford F-150 Raptor going against an eclectic mix of rivals, such as a C7 Corvette or a Tesla Model 3.

Of course, if you want something a bit more traditional, checking out the galore of footage surrounding the sixth-generation S550 Mustang is always a good way to lose countless hours late at night; we don’t encourage doing that at work because it’s way too enticing and time consuming.

On the other hand, the Haltech Hail Mary Derby – which was held last November – continues to remain a genuine treasure trove of exotic drag racing. Just think about it and remember that we already witnessed an 18-year-old taking over his dad’s 3,200-hp Dodge Viper, AMS Performance’s new Alpha Omega Lamborghini Huracan doing AWD wheelies (!), or a 1965 Mini dropping jaws when showcasing its turbo Honda K20 swap...

Now, how about some footage – again courtesy of the Drag Racing and Car Stuff channel on YouTube – that has the “classic in the making” stamp all over it? Granted, the video is a bit heavy on spectators bombing the actual race, but we still manage to check out this imported vs. domestic battle in all its glory.

As far as we can see given the nocturnal footage, the two white rivals are none other than Keith Rhea’s 2004 Ford Mustang SVT Cobra and Geo’s Real Street Performance Toyota Supra. In case you’re a newbie to the drag racing game, we can give you a hint: they're both professionally prepared to race in the 6-second category.

And they certainly make their owners proud, with both dipping into the 6.60-/6.80-second area. We’re not going to spoil the fun of watching this quick quarter-mile battle by telling you the winner in advance, though (the gallery does hold a caption of the result). 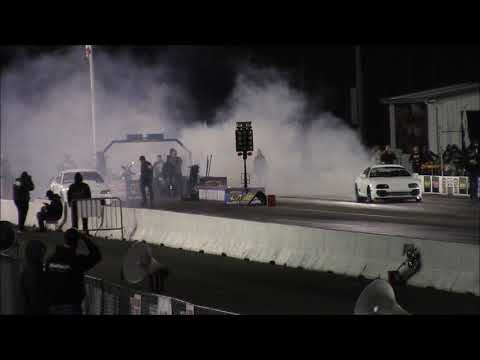