2 Can a Wooden Bike Be Eco-Friendly? Pardee Seems to Think So

3 The Wheelmen Custom Bike Is for the True Connoisseur, Costs $35,000

Musician Embarks on a 1,000-Mile Bike Concert Tour for the Environment

Home > News > Free-Roaming Wheels
Cristina Mircea
Sustainable transportation is a key factor when it comes to healing Earth and promoting a more environmentally-friendly lifestyle. And who better to lead the way than public figures who have the power to influence others into following their good practices.
1 photo
Austrian musician Manu Delago is a popular handpan player, drummer, composer, and producer based in London. He is a Grammy nominee, he collaborated with artists such as Björk, Anoushka Shankar, and others. But aside from his artistic background, he is also a passionate environmental activist.

The musician recently started a bike concert tour called ReCycling Tour 2021 and he plans to ride his bike for 1,000 miles (1,600 km), all across Austria, to promote his latest single, ReCycling. The song combines electronic music with bicycle sounds and handpan percussion.

The tour will consist of 25 shows played in 35 days and it debuted on April 30, in Tyrol, Austria. The last show on the tour will take place on June 2, in Innsbruck. Delago will stream LIVE several of his shows to fans worldwide.

Both him, his band, and the tech staff will ride their bikes to all the locations in the tour. The instruments and musical equipment will also be carried in specially built bike trailers. All the crew will use solar panels to generate electricity. As far as catering goes, plastic is not allowed throughout the tour, as they aim to keep waste to a minimum.

Delago’s initiative comes as a greener alternative to the conventional bus and airplane transportation generally used by musicians in their tours. Delago hopes to inspire people all around the world to approach a more sustainable lifestyle.

The musician’s project has been well received and encouraged both by his fans and other activists who offered to provide the crew with local, fresh, homemade food throughout their stops. 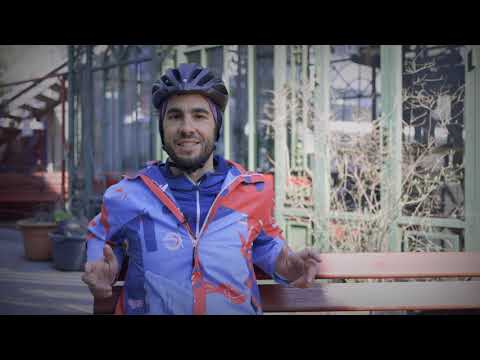