Once Rolls-Royce decided it would join the carousel of crossover SUVs with a Bentley Bentayga rival, it was obvious the Cullinan needed to be just a little bit overdone to stand out in a crowd. And imagine adding some Mansory DNA on top of that.
40 photos

The Rolls-Royce Cullinan full-size SUV was produced in response to the overwhelming demand for ultra-luxury high-riders from an automotive world that’s gone crazy over everything crossover, SUV, and truck. Naturally, it set its sight on the Bentley Bentayga and never looked back.

And since we are dealing with a Rolls-Royce, it’s only natural for personalization to take hold. Sometimes in the most exaggerated ways. Oddly enough, an expert at inducing automotive-related eyesores has delivered one of the tamest interpretations of the Cullinan to date. The brand, Germany-based Mansory, is a well-known expert in standing out in a crowd. Usually, not the right one.

But this time around they went out of their way to make a restrained case for themselves. And that hasn’t gone unnoticed in the United States if we are to believe the good folks over at Platinum Motorsport. These are the ones and the same who usually take care of Kim Kardashian’s huge fleet of custom vehicles.

And, also, they seem to have a knack for Mansory Cullinans, since this pair presented across social media (embedded below) has arrived after the shop has already completed more than 25 such builds. It’s not hard to imagine why they’re so popular, though, as the “leading designers & creators of high-end automotive culture and lifestyle” warrant their reputation.

It is also obvious why the SUVs were presented together. Both have been treated to the same Mansory widebody kit (with matching wheels, of course) and come with suspension modifications. Interestingly, they also bode well for anyone looking to appear both stylish and overdone at the same time. This is thanks to a cool little detail: the bling has been “deleted.”

More precisely, all the chromed bits and pieces were taken off, painted an ominously elegant nuance of high gloss black, and then reinstalled. Naturally, the trick stands out on the “Root Beer” brown-orange example the most. All in all, the team over at Platinum Motorsport reckons they just showed off a pair of vehicles valued at around one million dollars between them... 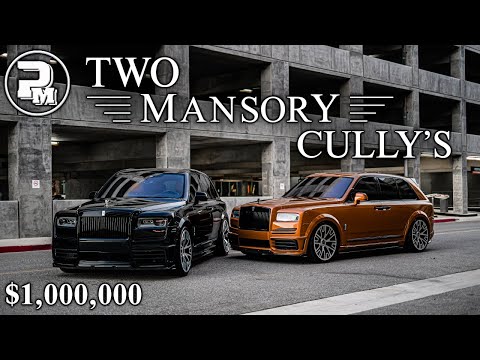