5 Rizer: Most Realistic Ascending and Descending Bike Trainer to Hit the Market
Car video reviews:
Up Next

Intensa Emozione? Apollo Will Also Manufacture an EV, the EVision

The wet and colder months are coming in hot; in-home activities are becoming more and more common. But how does this affect one of our favorite pastimes, cycling?

With the push towards in-home activities due to shifts in weather, cyclists are being forced to rethink the way they live their cycling lifestyle. One way lovers of the sport can still enjoy their favorite activity is with a stationary trainer. That said, it's time to meet Muoverti and their TiltBike (Tilt) stationary cycling system.

Folks, much about Muoverti isn't found as they seem to be a startup aimed at revolutionizing cycling trainers. Tilt hasn't yet been priced as delivery is expected in 2022, and currently, the company appears to be gauging people's interest in such a product.

Now, we've seen a few cycling trainers in our days, and some that perform pretty well. For example, the Rizer, from Elite Cycling, is an at-home trainer that offers riders a 30% incline/descent range that's made to mimic changes in terrain elevation.

Another recent addition to trainers is the RPV2 from Kom Cycling. This trainer is set up with multiple platforms and flexible risers in between, allowing for tilting effects while training, offering both an immersive experience, but also a good workout.

As for the Tilt, the name basically tells you everything you need to know about the trainer. As you can guess, it's a trainer created to offer riders a way of tilting their bike as they run through a virtual world, yes, similar to the RPV2; it just may be one of those same but different scenarios.

The way Tilt is set up is a bit different than other trainers too. Instead of utilizing a platform, Tilt is set up on a sort of shaft that simply tilts to an extent when activated. To keep you from falling off the bike or tipping the entire contraption too far, a set of legs extend to create a base.

Up next, you'll have your fork and bottom bracket (BB). Nothing is ordinary as Tilt features a very unique cycling frame. The BB will ultimately tap into the trainer's inner workings to help you unleash your true potential while a modified fork completes the trainer frame. Sadly, it seems that Muoverti won't just let you throw on whatever bike you want and bring their own works to the table; frames and setups will be a medley of bicycle geometries and traits, all working together to bring a heightened feel to the trainer.

While the Tilt doesn't have any sort of rising and descent features, tilting is all you'll be able to do. So far, it would seem very few trainers, if any, incorporate all rise, fall, and tilt features into one machine.

The ultimate question is, why would you want something like this? Well, if you're a diehard biker, and a rainy day or even a winter season tends to put a stop to your adventures, at least with a trainer like Tilt, your body's muscle mass won't diminish as you spend most of your time at home.

To offer as accurate a feel for the real thing as possible, Muoverti relies on a few mechanisms and software to make sure you get as close to a real workout as possible, isolating muscle groups from your legs, core, shoulders, and even arms.

To ensure this happens constantly, or as close to constantly as possible, software updates Tilt's functions 1,000 times per second. What more could you want? A rising feature on top of the tilting function? Give the industry some time.

As for pricing for this puppy, so far, none has been revealed. However, if you're into cycling and generally staying healthy, the Muoverti's TiltBike is a trinket you should keep an eye on. 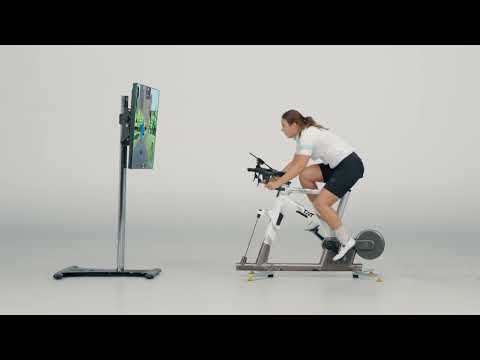