Home > News > Car Profile
Mihnea Radu
Japanese tuner Mugen has stuck its name to the Civic Type R many times before, but never like this. Tired of just making a few body bits and engine mods, the company has completely redesigned the CTR, now calling it the RC20GT.
6 photos

There are no two ways about it. This unique concept is nothing short of ugly. And that's painful to say, considering the boy kit that completely changed its look is mostly made out of carbon.

The best way to describe it is as the Gumpert Apolo of hatchbacks, a car so ugly only its mother could love it. You get the sense that they just had plywood to make the body kit mold, as everything is made with flat surfaces and pointy edges. Still, Mugen sees fit to call this the "ultimate" Type R.

At the front, the RC20GT features a shrunken central grille that reminds us of the old CR-Z hybrid. A vented hood has also been added, while the headlights have been moved for a frown appearance. What's the name of that fish that eats plankton off rocks? The parrot fish - that's what this resembles.

The sides are dominated by the enlarged skirts and new wheels, which have a weird retro vibe to them. It's like a vision of the future from the era of the DeLorean.

The overstatements continue at the back with a large air diffuser and a single race car-style exhaust pipe in the middle of the car. The trunk wing is new and even bigger than the one a stock Civic Type R has.

Opening the trunk would reveal that it's now fool of scaffolding. However, the interior is much weirder than that, as the steering wheel is now rectangular, while the rear seats are carbon fiber buckets. Why keep them in the first place? 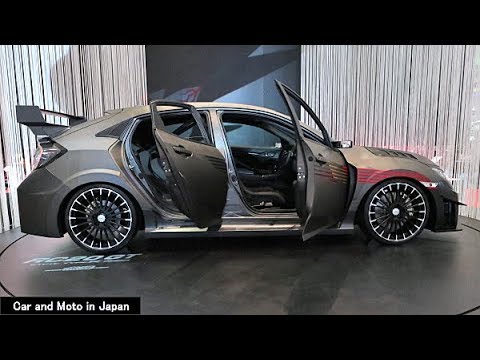