1 Royal Caribbean's Navigator of the Seas Returns to L.A. With $110M Worth of Upgrades

2 This Unique Ship Is a Floating Museum, Flaunts Pieces Worth Over $4 Million

4 Royal Caribbean's Ultimate World Cruise Is the Longest One Ever, Will Last 274 Nights

Alpina B3 Speaks the International Language of Speed, but How Quick Is It at the Track?

Sustainability and autonomous technology are two of the major trends that shaped the automotive industry in 2021, reaching other connected sectors as well. Shipping vessels are striving to become greener and more efficient, and even private yachts and cruise ships are following the lead.
9 photos

Plenty of cruise ships have been built last year, but MSC Virtuosa is unlike any other. The newest addition to the MSC Cruises fleet, which recently made its debut journey, successfully blends the major trends we mentioned earlier, with spectacular entertainment and accommodation options.

First of all, the 19-deck ship that can accommodate up to 6,334 passengers and 1,704 crew members, was built as one of the eco-friendliest cruise ships on the market. MSC Cruises, which claims the title of the third largest cruise brand in the world, wants to also become a pioneer of modern cruising, operating vessels that can help achieve the carbon neutrality goal by 2050.

In addition to being eco-friendly, this ship also premiers an unusual high-tech feature – the MSC Starship Club is not only a futuristic space-inspired bar, but it’s attended by the first humanoid robotic bartender at sea. Its name is Rob, and it will certainly become one of the main attractions on board. But the MSC Virtuosa – which was officially named by Sophia Loren, during a fabulous ceremony in Dubai, also flaunts the longest promenade at sea, with a spectacular LED sky dome.

Guests can also enjoy five huge pools, including one of the biggest waterparks at sea, ten restaurants, plus 21 bars and lounges.

After the fabulous naming ceremony that took place at the end of last year, this unique eco-friendly cruise ship, with the first robot bartender on board, is currently operating in the Arabian Sea, from its Dubai base. 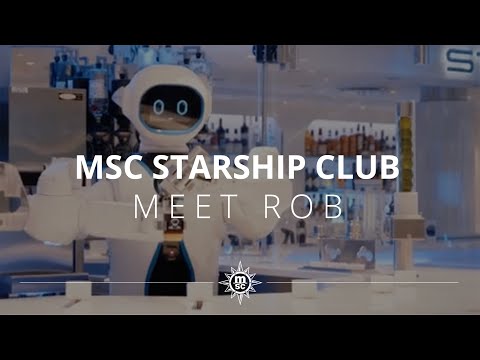