2 Will Smith Takes a Dive in World’s Deepest Pool, Complete With Sunken City

3 Blast From the Past: World’s Biggest Demolition Derby Crowned a Toyota as Winner

4 Blast From the Past: 41 People Crammed Into a Toyota RAV4 for a World Record

There’s something incredibly awesome and equally terrifying about making motorized tools hit very high speeds, whether they’re wheelbarrows or lawnmowers. One engineer from the UK has been spending the past couple of years working on one such project and is now reaping the fruits of his labor.
6 photos

Tony Edwards calls it Mowabusa, now officially the world’s fastest lawnmower, as certified by the Guinness Book of World Records. Mowabusa can still cut grass – in fact, it was one of the conditions for the record attempt – but it now does so at a top speed of 143.193 mph (230.446 kph). That’s one way to finish the chores in very little time.

The record was actually set on August 22, 2021, at Elvington Airfield outside York, UK, but has just been certified by Guinness.

The previous record for a very fast lawnmower was 133 mph (214 kph), and Edwards’ goal was initially modest: he only wanted to go a couple of miles over it, to secure his place in the history books.

Speaking with The Sun once Guinness certified his attempt, he said the project was well worth the two years’ worth of work and the £30,000 ($40,800) he invested in it. His wife, for one, was particularly happy with it because it kept him out of her hair, so presumably, she didn’t mind the expense.

The Mowabusa is powered by a 1,300cc engine from a Suzuki Hayabusa, hence its name. It uses the front suspension from a car and a trike conversion kit in the rear, and it qualifies entirely as a home-built project. As noted above, it can still mow the lawn, with Edwards having to use it to cut grass after the speed record attempt, to show Guinness judges that it still could.

Here’s Edwards at the 3-minute mark in the video below, talking about his record attempt and explaining what makes the Mowabusa such a unique vehicle. 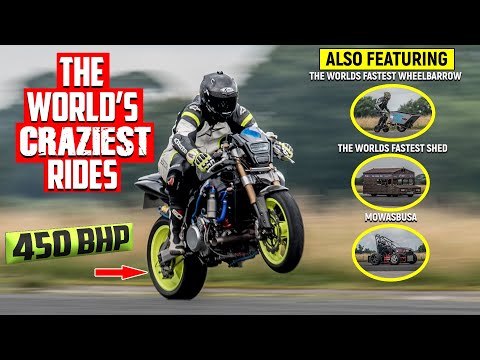