1 Guy Acting like a Fool at a Gas Station Has Us Wondering How Can He Even Drive?

5 You Can Play With Bulldozers and Excavators in “Dig This” Theme Park
Car video reviews:
Up Next

Movie-like Escape from Dangling SUV Is an Excitement Overdose

You know how people often complain about their lives being just a little bit too "boring"? Yeah, the routine is killing us. We wake up, we have our breakfast and our coffee, we take the dog out, take the kids to school, go to work, come back home, make dinner, watch TV, go to sleep, rinse and repeat.
3 photos

Well, how's this for an idea: next time you arrive at the office and park your car, try mistaking the brake pedal for the accelerator. Before you do that, make sure your office has a multi-storeyed parking lot and that you're on a high enough level that the eventual drop would kill you. Also, try to point the car toward one of the windows, because we don't want to be running into walls, pillars, or other cars and miss our jump now, do we?

Not exactly what you had in mind, is it? Given the haste with which he got out of the car, we'd say it wasn't exactly what this poor man from Austin, Texas, had in mind for his day either. He was trying to pull into a spot on the roof of a nine-storey parking garage when he probably hit the wrong pedal and sent his car flying through the protection wires.

Those thin metallic cords that don't seem to provide too much protection turned out to make the difference between a spectacular escape through the sunroof and a horrific fatal drop. One of the cables reportedly wrapped around the vehicle's front axle cutting short its fall. The unidentified 24-year-old man can be seen climbing out of the dangling car and onto the safety of the parking garage's platform.

It turned out that the cable was well enough secured to support the vehicle until the firefighters arrived. The SUV was then slowly and safely lowered to the ground, which meant that the incident ended without anybody getting hurt. It's also fair to assume that the lives of everyone around stopped being boring for a few minutes - for some more than others. 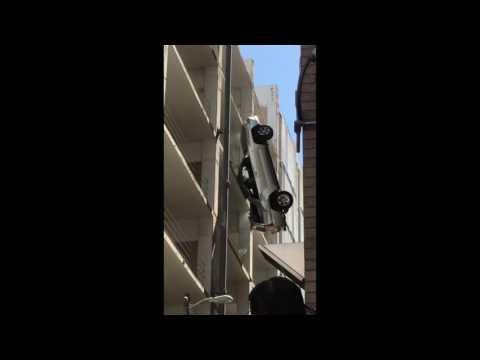