3 Danny MacAskill's Latest Clip Is a Tourism Brochure for Scotland

5 Guy Martin Attempts Another Record, This Time In Air
Car video reviews:
Up Next

Your parents, just like ours, probably told you it's not nice to laugh at other people's misfortune. However, the thing is there was no Internet back when they grew up, so they have no idea how hard this get at times.
8 photos

It's not that we don't feel bad for those who feature in the videos. We can empathize just fine, it's just that we tend to have a laugh first, and then feel sorry for the involuntary actors. Sometimes, we can even do both at once, but that's reserved for the more serious cases.

This one isn't one of them, though. But it's not like it couldn't have been. That first slope filled with sharp rocks looks quite menacing, and I know a few people who would have a hard time going down on their own two feet, let alone on a two-wheeled vehicle. He, however, isn't afraid to try.

That doesn't mean he makes it too far before slotting his front wheel into a large rock and falling over. That full-face helmet and his dampening techniques save him from a trip to the hospital, but they seem to do much more than that as he climbs back on the bike and starts pedaling away.

You gotta give it to this guy: he's got plenty of heart. Most of us would have given up after that first hard encounter with the rocky soil, but he kept soldiering on. He does seem to be a little more careful than before, but who can blame him?

And yet it didn't help him too much. After a few more jumps and rather tricky sections of the course, he somehow manages to fall on what looked like flat ground. He just leaned too hard in a left-hand turn and lost control of the bike. The spectators don't seem to impressed and cheer him to carry on.

Which, to his credit, he did. A few seconds later, though, he probably wished he hadn't. He expertly clears the first jump, but with the second, he whips the tail of the bike out, as if attempting to say "hey, I might have fallen a few times (two, we were counting), but I'm not normally this crap." Sadly, his trick isn't successful, so he falls for the third time.

We don't get to see whether this was the long overdue end of his ride or he kept going, but it does remind us of an old Chinese proverb where a guy who stumbles and falls for the second time, seeing how he ended back on the ground, regrets getting up after the first. They don't say the Chinese are wise for nothing. 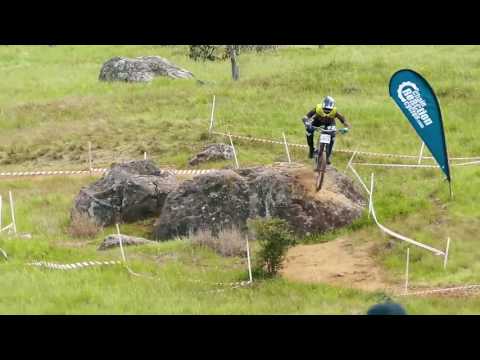