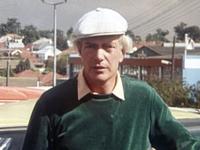 "It was his lifeblood," she said. "So when the ABC ran out of funding for these programs it was like tearing his heart out really."

Wherrett developed a passion for cars since he was a teenager. He first learned to drive when his parents got their first motor car; he was twelve then. By the late 1960s, he was teaching advanced driving skills in Sydney. In 1967, Peter Wherrett set up Australia’s first post-licence driver training school as "Peter Wherrett Advanced Driving". In 1980, he sold the school to his manager Peter Finlay.

However, Wherrett was best known as the presenter and co-writer of Torque, a popular motoring show in the 1960s and 70s.

"He was a natural television talent, there was no question about that," his wife added. "He took to television like a duck to water. He just stood in front of the camera and opened his mouth.He never prepared, he never had notes, he just uttered whatever came into his head and it was invariably to the point, concise and entertaining."

Nevertheless, after having asserted that women were better drivers than men he became quite a controversial figure in those days.

A private memorial service will be held this week.