Vlad Mitrache
We know that title makes very little sense, but we promise you this: all that will change after you watch the clip. It may not roll off the tongue, but it was the best we could come up to summarize everything that happens.
7 photos

Those of you who spend more than a healthy amount of time on the Internet might still have the memory of the guy losing control of his Can-Am three-wheeler at the skate park in Denver quite fresh in your minds, so you're no stranger to things going wrong for vehicles with less than four wheels and their handlers.

Besides, it's not the first time you've seen people mess loading motorcycles into trucks or other vehicles either. The temptation to do something stupid in these situations simply seems to be too great for mere mortals to resist. Either that or people think it's much easier than it really is.

Well, it can be simple, but simple isn't spectacular enough for YouTube. You can mount two ramps (or a wider one, like in this case), and have the person ride next to the bike while giving it just enough throttle and clutch friction to slowly climb up in a safe and controlled way. Of course, should anything go wrong in this situation, the bike is a goner because there's no way that person will be able to do anything about it from the position they're in.

To do that, you need to be riding the bike. Obviously, this method infers other risks, especially since people rarely tend to wear any type of protective equipment during such maneuvers. Why would you need a helmet when you're about to load a bike inside a metal box five feet above the ground by going up an improvised ramp that's obviously too steep, right?

You don't need an engineering degree to know the setup these guys had prepared wasn't going to work. The motorcycle’s wheelbase wasn’t going to clear that top angle anyway, which makes the fact they placed the ramp with that last piece of plywood (could be OSB) sticking up at the top even more hilarious.

Of course, none of this was going to keep our champion from attempting the procedure. We’re not sure whether he was planning to clear it by jumping or doing a wheelie – or he just hadn’t planned at all – but whatever it was, it didn’t work. Time to panic.

Not this guy, though. Instead of losing his cool, he instead dialed it up. He reversed down the ramp – as calmly as the situation allowed – went over a ladder, and, as the bike finally came to a stop, he smiled to the camera and revved the engine. There was more relief in that gesture than triumph, but the bike was in one piece (though the dented gas tank suggests this wasn’t its first rodeo) and so was he.

With the image of the Can-Am guy still lurking in our brain, we watched this whole clip extremely tensed, waiting for the blood to start spurting out and the bike to suffer some catastrophic damage. Even though that doesn’t happen, don’t worry, you won’t be disappointed. 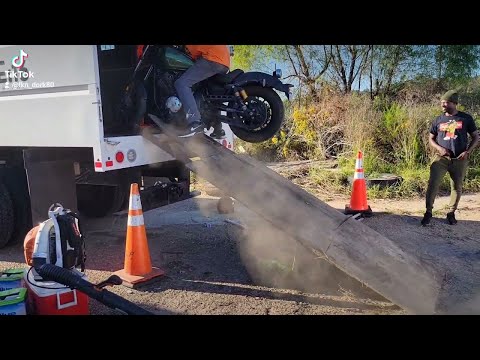 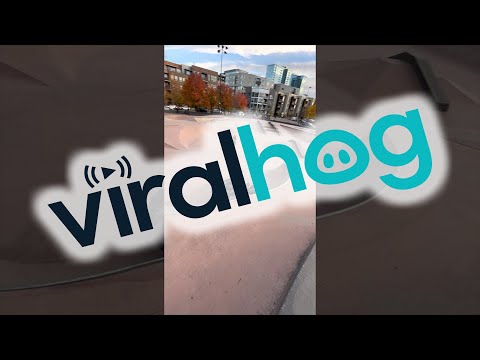