5 Iron Heart Makes Heaviest Denim in the World
Up Next

How to Choose Your First Bike: Episode 1

Hello there, fellow riders and fellow readers. Thanks for checking back with us this week for the third part of the myth-debunking endeavor we've started.

The first two episodes dealt with matters such as the “loud pipes save lives” slogan many riders still prefer to hold true, and the “laying it down” advice and stories circulating around the two-wheeled world.

Now, having read the first two episodes of the series, you've probably learned that we're not necessarily trying to force people into believing what we say, but rather to shed more light and details on important matters. And since some of the myths are closely related to safety, we believe it’s well worth bringing them into discussion.Why leather?
In fact, this is probably one of the silliest things to be said about a motorcycle rider; the sad part is that I've heard this so many times and from so many people (just like I'm sure most of you have, too) that I realize how many guys out there have no clue what bikes and biking are about.

Social and media stereotypes are most likely at the foundation of this myth; just review some of the movies you've ever seen and recall the image of the negative characters. Black or red shiny leather, spikes and other pointy details. Get it?

It's quite difficult to find out what has made people believe that more evil equals more leather; silly as it is, just turn on your TV and you'll find tons of such stereotyped images. Now wearing pointy accessories and other objects when it comes to riding a bike is a bad idea even for a no-brainer; you don't have to crash to injure yourself when surrounded by all sorts of “evil paraphernalia”. But leather, this is a completely different story.

It may be striking for some to learn that during the past ages, leather was widely used for clothing, given the absence or scarcity of other resilient materials. Man has understood the benefits of wearing wild animals' hides thousands of years ago, and from hunting to skinning the domesticated animals was just a small step. 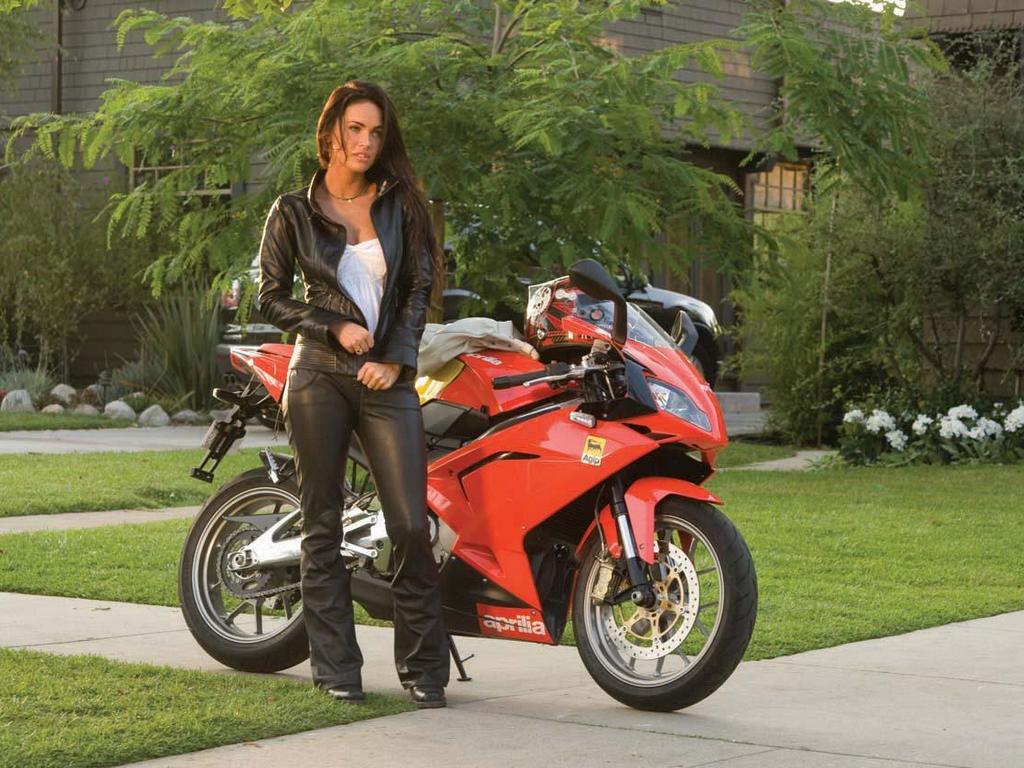 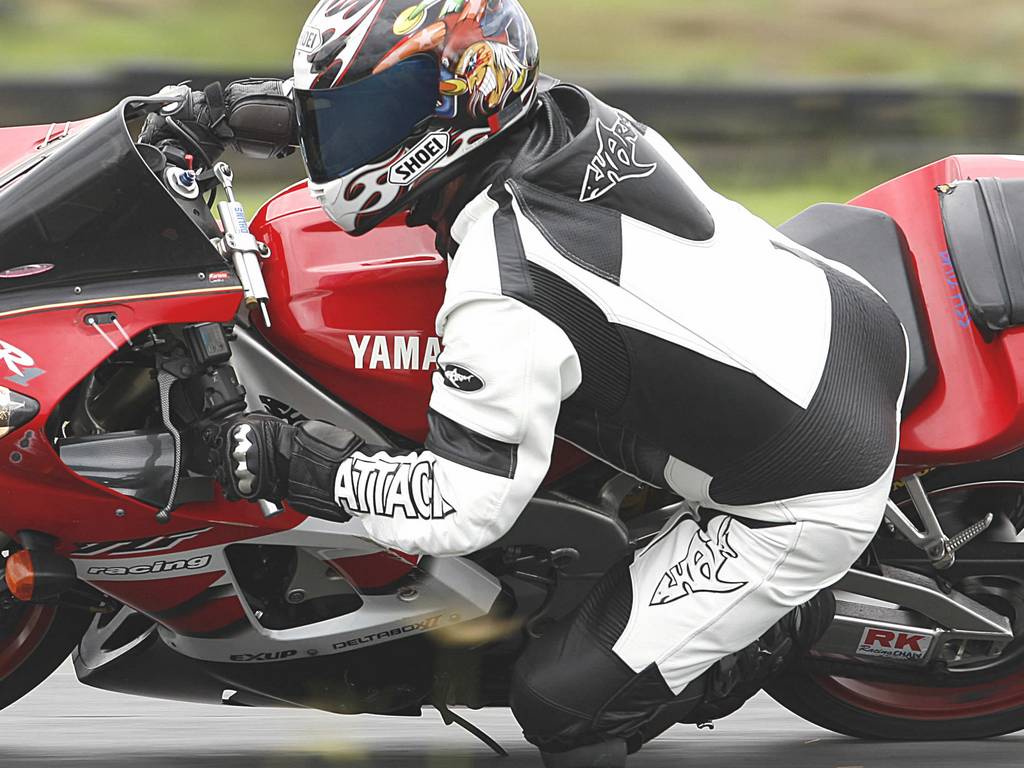 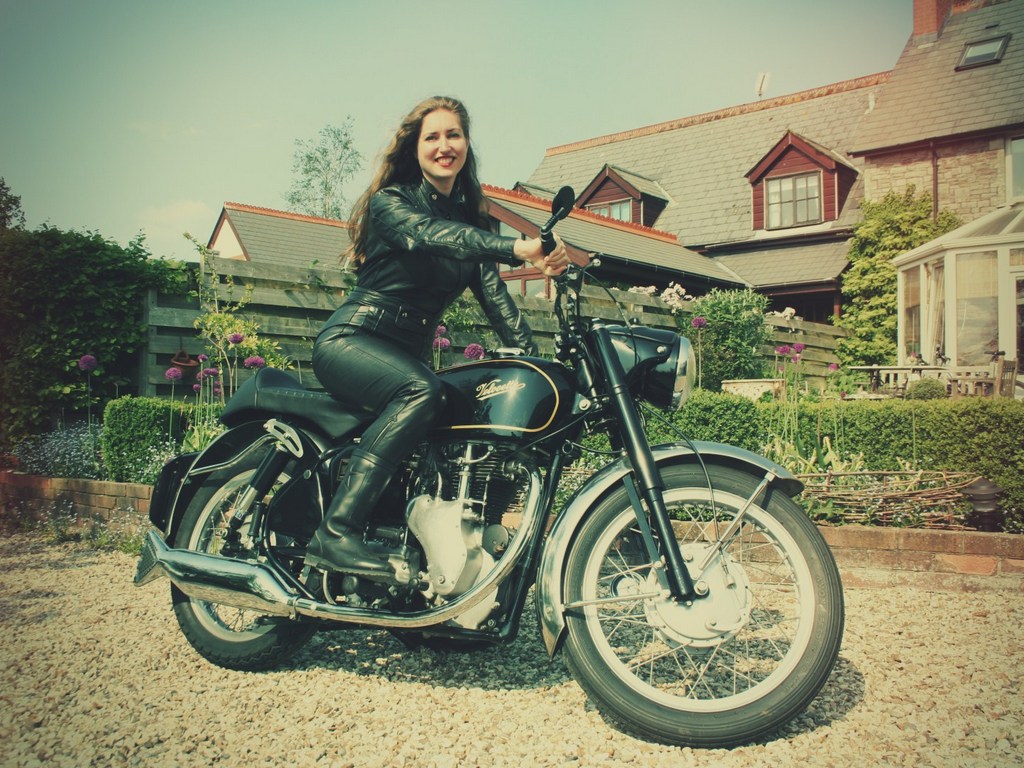 The fact is that leather comes with certain advantages that none of the old materials used for clothing had. The first and probably most important feature was its constructive strength. Treated leather comes with increased resilience against cuts and tears and multiple layers can even be transformed into a very effective armor.

While still easily bending, leather is quite comfortable for trousers and all sorts of garments. Adding in further treatments (such as animal grease, in the times of old) makes it impermeable, thus being a most suitable choice for defending against rain and inclement weather. And since leather is also windproof and comes with exceptional resistance to abrasion (probably its cornerstone feature), it was just a matter of time until it became the choice for protective clothing.

Of course, since back in the day, poor peasants could never afford exquisite leather clothing, it was usually the rich persons wearing it. As a display of social status when elegantly tailored and trimmed, or worn to impress and inspire respect or fear (remember the executioners' hoods), leather has been favored by many.

Leather looks good, and leather on beautiful people looks even better. While some still say it's almost vulgar and would rather die than wear leather garments, there are still a lot of people who enjoy them. Nowadays, few guys would wear leather to impress others and bikers will have little trouble identifying the posers. Most riders wear their leathers for completely different reasons, though.Bikers wear black leather to look cool and mean
Take a look at a group of motorcycles driving by and you'll notice that most riders wear black leather. Do they think they look way cooler or is there more to that? If “why black?“ is the first question popping in mind, the answer is dead simple: because black is the most common color for leather.

Dyeing a piece of leather black is the easiest way to cover imperfections; since larger sheets of leather with close-to-perfection looks and texture are rather hard to come by and are also very expensive, covering everything in black solves the problem.

Even more, dust and dirt look less objectionable on black leather. While black itself might be looked at like a very elegant color choice, I believe you'll all agree that mud splats look less displeasing on a black pair of trousers than mere dust on a red or white one. Hence, the omnipresence of black leather in the bikers' world: they like black, manufacturers will always provide black leather clothing, everybody's happy.

I have mentioned abrasion resistance earlier, and for a good reason. We ride just inches from the ground, be that asphalt, gravel, mud and whatnot, and should we unexpectedly happen to meet the ground, we'd surely love to have something between our own leather and Mother Earth.

Leather happens to be one of the best materials to protect a rider from the pavement, and that's why one could buy almost any piece of apparel in leather: jackets and vests, pants and chaps, gloves and boots, all in a plethora of designs and colors, silly cheap or insanely expensive, as needed.

When spilling, this second skin will scrape off first; it's way more durable than human skin and will hopefully last enough until the fallen rider stops sliding on the road. He or she would then be glad they bought (and worn) that gear and spared themselves the nasty bruises and asphalt rash. Funny thing that riders spend a lot of money on expensive leathers, yet somehow hoping they'll never get to put them to proper use, if you get the meaning.

Leather jackets, pants and all are way better and more complex than the simple clothing 50 years ago. Better machines cut the leather in more intricate patterns that allow the designers to create more comfortable gear. At the same time, a wider range of special treatments are available to condition the leather and make it more durable and with better resistance to water.

Even more, climatic liner membranes such as Gore-Tex, SympaTex and so many more dramatically improve the protection against inclement and especially wet weather, allowing motorcycle pilots to ride more and better, even in adverse conditions. 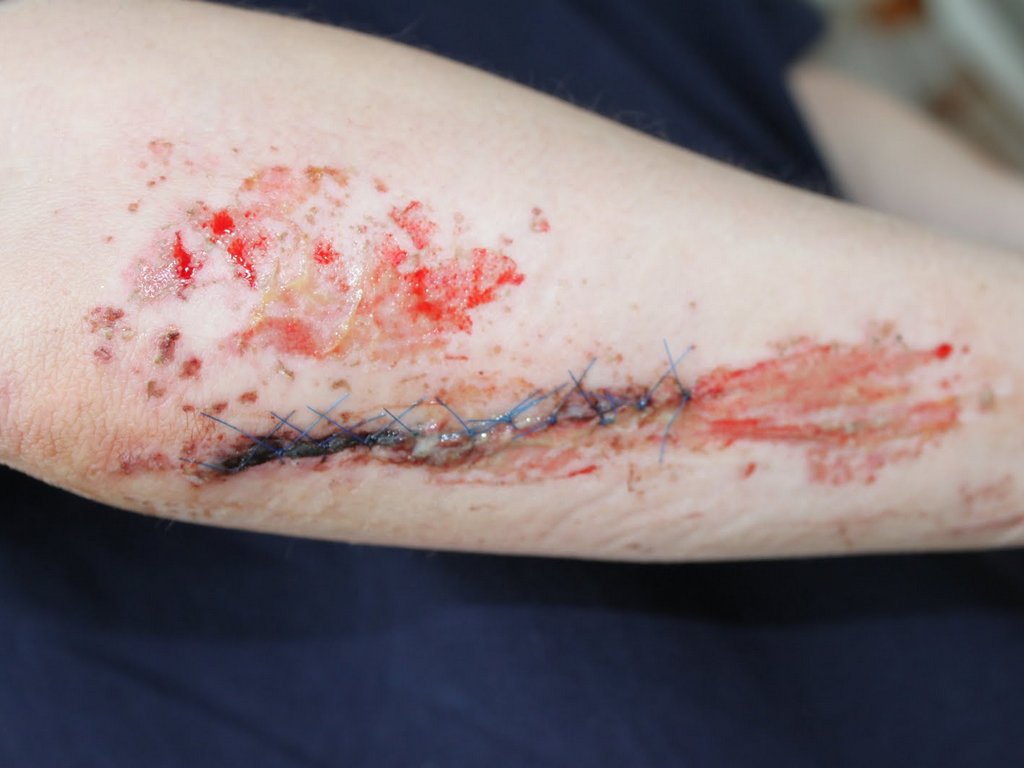 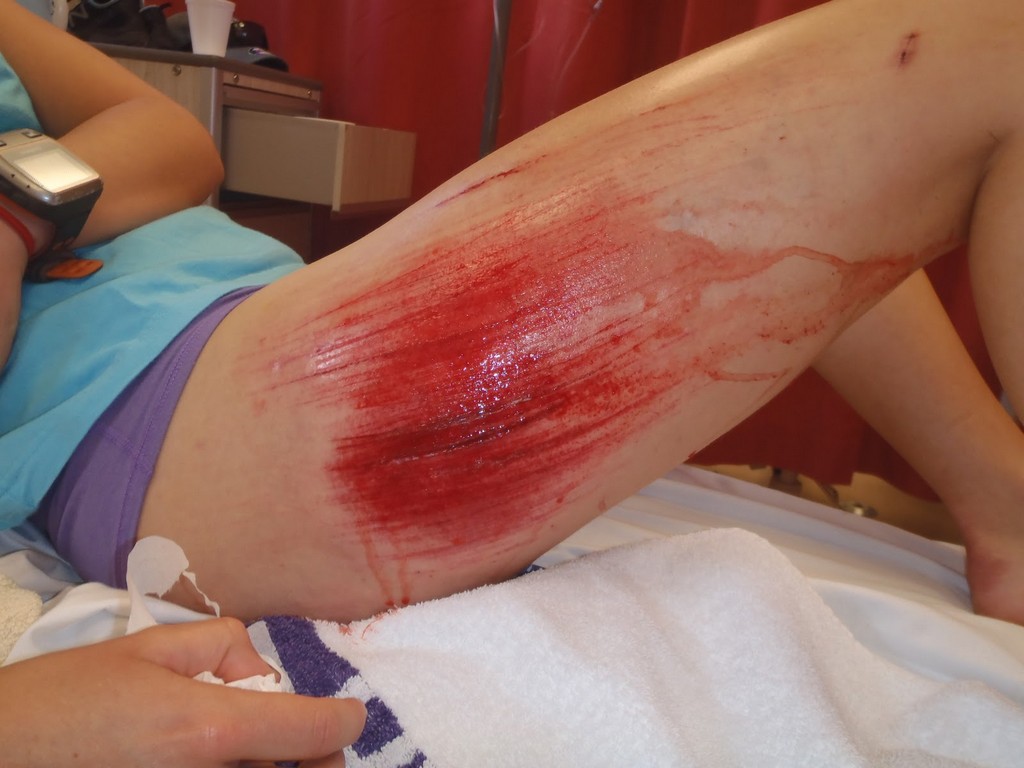 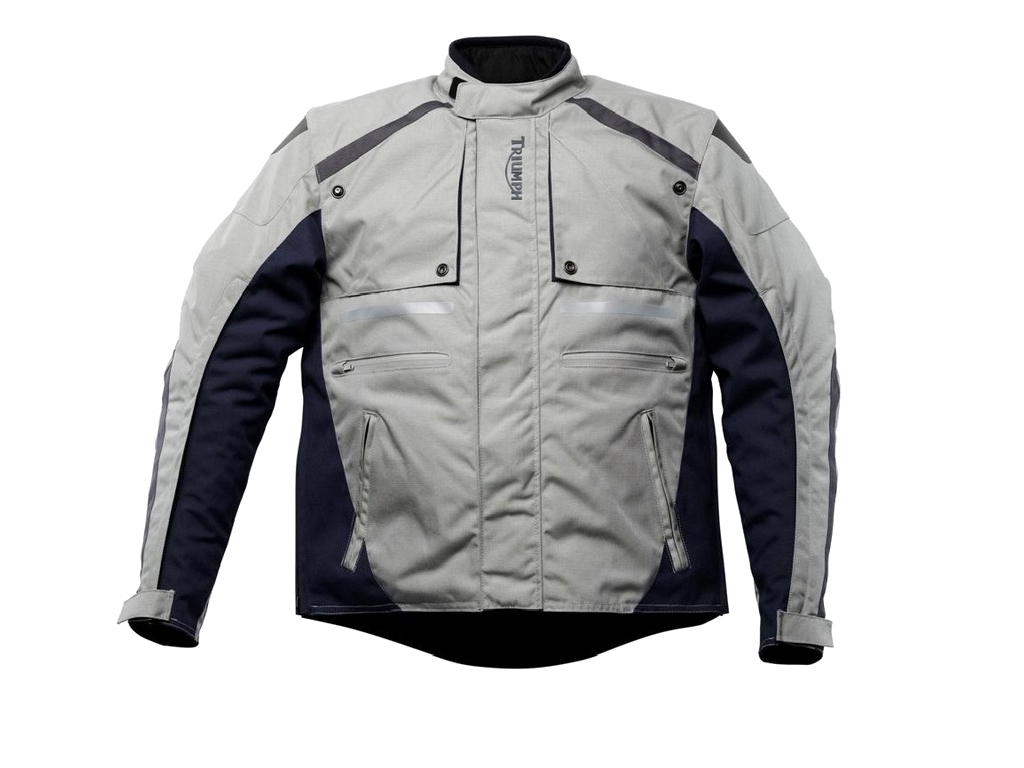 Now, there are one or two things about leather, which must also be stressed. First of all, a leather suit is less breathable than a textile one. The modern era has brought a lot of technical advances as far as materials used for clothing are concerned. There are fabrics which are lighter, thinner than leather, easier to obtain and obviously cheaper.

Some of them, like super-strength Cordura or certain Kevlar-woven cotton fabrics are several times stronger than leather. Cushioning inserts are more easily placed in textile clothing and this apparel can thus be manufactured closer to the best protection designs created by specialists. Even more, it's more economical, as most of these synthetic materials can be recycled via buy back deals.

The second thing is that wearing leather usually means a lot of heat, especially during the warm season or when cruising through the city. If you're riding to work in the mid-July sun, a fully-zipped leather jacket and leather chaps might not be the best idea; excessive heat can lead to poor focus and dehydration, both able to cause crashes, making multiple showers a day and constant water intake mandatory.Is leather the choice?
Some might ask whether leather is the choice for protective clothing and I believe it's rather hard to give the ultimate answer. From a technical point of view, there are fabrics that perform better in both rain and shine and also come with increased protection against the pavement. Reflective materials are easier to embed in textile garments, even if most new leather clothes also come with hi-visibility elements.

Textile gear needs less attention than leather clothes: while leather must be carefully set to dry and treated after riding through the rain, synthetic fabrics require almost no special treatments and dry faster.

Of course, textile-riding gear with an embedded climatic membrane comes with special cleaning procedures and failing to comply can permanently damage the waterproof lining, but with detachable liners, things are easy as pie.

In the end, choosing either Cordura or leather is a matter of personal preference. It's hard to believe we'd meet many off-road riders wearing leather, like there are even less chances to see a custom Orange County chopper owner dressed in Rukka gear. But you can all be sure about one thing: bikers don't wear black leather because they want to look cool.