5 Uber Partners Up with Navigation Company TomTom
Car video reviews:
Up Next

Of all the voices in this world, Morgan Freeman’s has got to be one of the most soothing. It’s like a balm for your soul that enters your body through your ears. So who better to have guiding you around the city at rush hour?
1 photo
Not sure if it’s the white hair, the all-knowing smile or the science programs he’s presented, but there’s no doubt in my mind that Morgan Freeman knows everything. So if I feel like taking a right, but he jumps in and tells me to go left, by God I will go left and never look back. I mean, I do check my rearview mirror once in a while, but that’s it.

Having celebrity voices on navigation systems isn’t something new, and we can all remember TomTom’s Star Wars-themed pack and the good laughs it provided, but the great thing about this new collaboration involving Morgan Freeman is that it’s completely free. All of it.

For the past few years, Waze has given established navigation system manufacturers some serious headaches. Not only is the app free to download but it’s also very well thought out and offers plenty of options that were unavailable on the old, unconnected devices. Using data from all the Wazers, the app can give you the fastest route possible in real time, which is pure gold in those situations when, if you were on your own, you would spend hours trying to decide whether to stick to the main road or go for the shortcut. And when you finally made a decision, you’d be convinced it was the wrong one. Waze makes that decision for you in no time and, in nine out of ten cases, it’s right.

What’s in this for Morgan Freeman? Well, just some extra notoriety that he’ll put to good use in promoting his latest movie, “London Has Fallen,” which opens on March 4. But the main highlight here is that with Morgan Freeman’s voice as your satellite guidance, all of your commutes suddenly appear to be a lot more important to the fate of this world. That right turn you just missed might very well be the source of the annihilation of an entire species.

The voice package is available for download now, but there’s a bit of bad news: it’s only available in the US. With the title of the movie implying it takes place in London, you’d expect that at least the UK residents will get it, but that’s not the case. At least not yet. If I’ve wound you up to this point only to find out you’re not going to get it out of geographical reasons, what can I say? Sorry? Just read it with Morgan Freeman’s voice, and I should be off the hook.

And just for laughs, here is an older video imagining what it would be like to have a brutally honest interactive navigation system with Morgan Freeman’s voice. 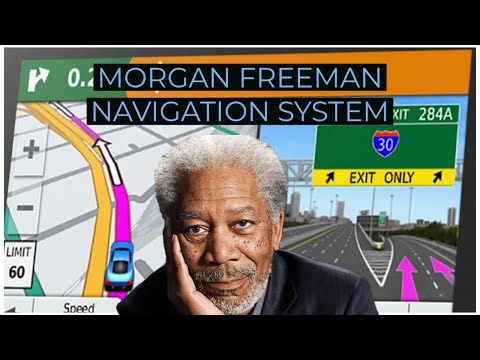