1 Aston Martin's CCO Believes EVs Are Not the Future, He Might Be Right

2 These Are the Most Iconic European Muscle Cars

The 1990s gave us some incredible supercars like the McLaren F1, Dodge Viper, Bugatti EB110, and Ferrari F50, just to name a few. The list of greats also includes a limited-edition Aston Martin V8 Vantage that enthusiasts seem to forget, even if it was one of the most powerful production cars of the decade.

The story of the V8 Vantage range starts in 1977, when the British carmaker introduced a new model that was quickly hailed as Britain’s first supercar. As much as the brand’s enthusiasts hate to admit it, the performance-oriented grand tourer oozed American muscle car vibes and looked a lot like the first-generation Mustang. It was a luxurious machine with a potent, in-house developed 5.3-liter V8 consistently improved during the model’s twelve-year lifespan. The last iteration was available with a Works Service big-bore upgrade that increased displacement to 6.3 liters and pushed power to 450 horses.

In 1989, it was succeeded by the Virage and four years later, the Vantage nameplate returned as a high-performance version equipped with a 550-hp, twin-supercharged banger that made it one of the most powerful production cars around.

As the 1990s were coming to an end and stricter European emission and safety standards were on the horizon, Aston Marin was forced to discontinue the V8 range. But, before the curtain was drawn on the Virage and high-performance Vantage, the manufacturer decided to release a special edition that was more outrageous than any road-legal Aston before it.

Announced in 1999, as the company was celebrating 40 years since Roy Salvadori and Carroll Shelby co-drove the DBR1/2 to victory at the world’s most famous 24-hour race, the car was dubbed V8 Vantage Le Mans.

Hand-built from the ground up at the Newport Pagnell factory in Buckinghamshire, it looked much like the standard model to the untrained eye, but several unique features made it clear that this was no ordinary Vantage.

Its front end donned a unique body-painted grille with two big air ducts, a redesigned scooped hood, and an improved high-downforce air dam, while for the fenders, designers conceived a set of special side vents that were inspired by those of the Le Mans-winning race car. Visual upgrades continued at the rear, where a revised spoiler and high-intensity taillights were incorporated to boost the aggressiveness of the special edition.

If the exterior was distinctively sporty, the interior was a different story. In typical Aston Martin fashion, the bulk of the effort went into creating a luxurious cabin that featured full Connolly leather upholstery, with matching Wilton wool carpets. The fully electric, heated seats were ample and felt like fancy armchairs taken from a duke’s mansion. The only trace of sportiness was a set of titanium dash trims and an enlarged rev counter with a white background that went up to 7,000 rpm. Curiously, the plebian steering wheel wasn’t revamped, and it was shared with the eight-generation Lincoln Continental.

Power came from the last iteration of Aston Martin’s V8 which was based on Tadek Marek’s 30-year-old design. To comply with emission regulations the 5.3-liter, quad-cam unit boosted by a pair of mechanically-driven Eaton superchargers left the factory in standard spec, which meant it could make 550 hp and 555 lb-ft (745 Nm) of torque. However, all Le Mans special editions were sent back after delivery to receive the V600 package. This option added a re-engineered cooling system and an extra intercooler that helped increase output to a whopping 600 hp and 605 lb-ft (820 Nm) of torque, figures that made the V12-powered Ferrari F50 seem like an average sports car.

The beefed-up engine was complemented by various chassis upgrades like a reinforced suspension with bespoke Koni shocks, Eibach springs, or sturdier anti-roll bars while stopping power was improved with the addition of bigger AP brakes.

Produced in only 40 examples from 1999 to 2000, the V8 Vantage Le Mans with its V600-spec monster of an engine was not just the most powerful Aston Martin ever built, but also one of the most powerful supercars of the 1990s.

After discontinuing the V8 range in 2000, the British carmaker concentrated its engineering efforts on a Ford Duratec-derived V12 that was fitted to the DB7 (from 1999) and DB8 (from 2004). The V8 Vantage returned in 2005, powered by a Jaguar unit. The current generation, introduced in 2018, is an absolute stunner but like its predecessor, it doesn’t come with an Aston Martin engine, hiding Mercedes-AMG’s twin-turbocharged M177 V8 under the hood.

Today, the Le Mans V600 is considered the last thoroughbred V8 Vantage that Aston Martin has produced and it’s highly sought-after by the brand’s enthusiasts. That being said, it isn’t as expensive as you would expect. In 2014, the black example featured in the gallery was sold at a Bonhams auction for £ 348,700 (around $420,000). More recently, one of just 22 left-hand-drive units went under the hammer at an RM Sotheby’s event in 2020, fetching $379,000.

If you want to learn more about this spectacular grand tourer, we recommend watching the YouTube video below by If Cars Could Talk. 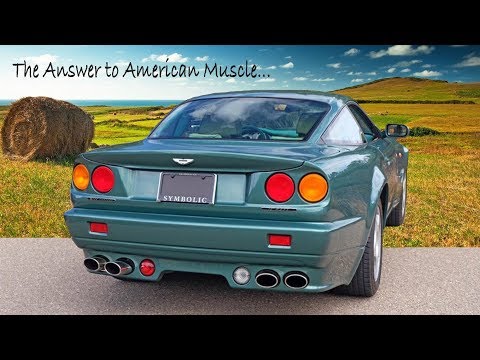