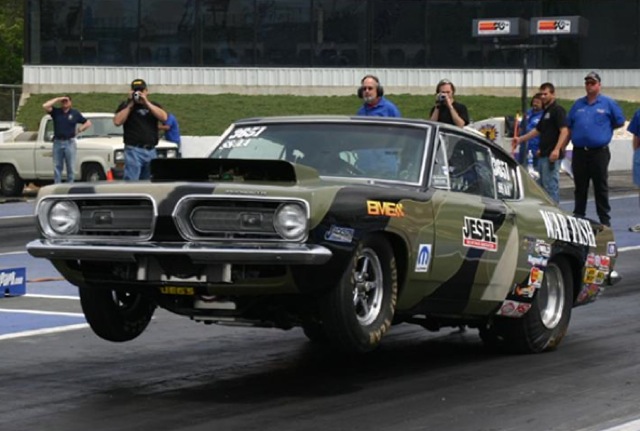 Westcott Sr.'s engine was damaged in Indianapolis in a bye run. The team scrambled and in about 90 minutes, John Rains’ spare Westcott-built 426 HEMI was fitted into the Barracuda, allowing the car to cross the line in the nick of time.

His son, Westcott Jr., holds both ends of the SS/AH record, with an elapsed time of 8.38 seconds at a top speed of 157.08 mph. Alongside him, the field of HEMI Super Stockers will include Dart drivers Jim Daniels and Jim Pancake, while Barracuda drivers at the line will be Jim Keyes, Jeff Kobylski, Don Bales and Randy Warford.

“The Mopar HEMI Challenge illustrates the amazing dedication of the grassroots racers who are the core of the series,” Jim Sassorossi, Mopar Global Parts sales and marketing director said. “The dedicated racers who compete in the Mopar HEMI Challenge buy parts from a Dodge, Chrysler or Jeep dealership and pour money, time and sweat into their Mopar HEMI-powered race cars. They are great examples of the passion that exists in the drag racing community for the Mopar brand.”

Following this leg, the Mopar HEMI Challenge will head for Maple Grove Raceway in Reading, for the October 22 race.