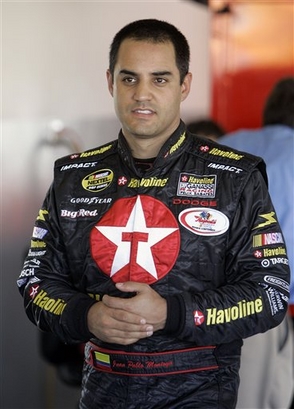 Juan Pablo Montoya was about to score his best Sprint Cup result of the career on an oval track last weekend in Atlanta, but bad luck and a questionable call from crew chief Brian Pattie prevented him from finishing on an encouraging Top 10 position and, maybe, even challenge for the race win in the final laps of the race.

The Colombian started the race from 24th place and is seemed it would be another struggling performance by the #42 Dodge on a Sunday afternoon. Nevertheless, Montoya kept his cool in traffic and gained position after position until finally making the Top 10 with more than 200 laps to go in the race. He maintained pressure on the front runner in the second part of the race and was running into 5th before the 8th caution of the day.

Pattie then decided to change all 4 tires on the #42 Dodge so his driver could benefit from increased grip in the final laps of the race and even challenge for the win, if possible. Everything was going according to plan by the time Montoya left the pitstall and would have continued to stay the same hadn't it been for Clint Bowyer bumping into his car when trying to get ahead of the Colombian.

Montoya had to go back to the pits as the impact caused extensive damage to his car and returned to the track just ahead of the race leader. And, as bad luck never comes alone, Montoya was soon involved in a multi-car incident shortly after the restart.

“We had a top-five car at the end. We decided to take tires. I think most of the people came in and took tires. It's annoying, because you could say we shouldn't have taken tires because we were wrecked. But I think it would have cost us if we hadn't and it was the right call. came out of one lane and I think Bowyer was fighting for the lucky dog and he came down and hit us. It's kind of stupid. He was following another car and just came down and clipped our front tire,” said a disappointed Montoya at the end of the race.