Californian Sustainable Fuel to Power Future Flights From the U.S. to Australia

Home > News > Videogames
15 Mar 2022, 04:54 UTC ·
by Cosmin Vasile
Racing game fans are probably aware that we’re just a few days away from the launch of Monster Energy Supercross – The Official Videogame 5. However, if you’ve pre-ordered the game on either console, PlayStation, or Xbox, you can play the game before the official launch, developer Milestone announced.
6 photos

The latest entry in the realistic Supercross video game series is now available on PlayStation 5, PlayStation 4, Xbox Series X/S, and Xbox One in Early Access. To qualify for Early Access and be able to play the game right now, you’ll have to pre-order the Special Edition of Monster Energy Supercross – The Official Videogame 5.

Unfortunately, Early Access is not available on PC, so those who don’t play on consoles will have to wait until the game releases later this week. In fact, pre-ordering on PC is not even possible, but you can wishlist the game on Steam if you want. It’s also important to mention that players who purchase the game on PlayStation 4 or Xbox One will be able to upgrade for free to the PlayStation 5 and Xbox Series X versions.

Just like the previous entries in the series, Monster Energy Supercross – The Official Videogame 5 promises a hyper-realistic and immersive Career Mode. You’ll be starting from the 250SX Future Class and making your way to the 450SX Class. More importantly, the game introduces a so-called “Rider Shape System,” a new feature specifically designed for Career Mode that affects riders’ performances in case of falls or injuries.

A new friendly tutorial has been included too in order to better accommodate newcomers to the series. It’s meant to teach the Supercross basics and help players climb the ladder from Beginner to Pro easier.

Monster Energy Supercross – The Official Videogame 5 is set for release on PC, PlayStation 5, PlayStation 4, Xbox Series X/S, and Xbox One on March 17. 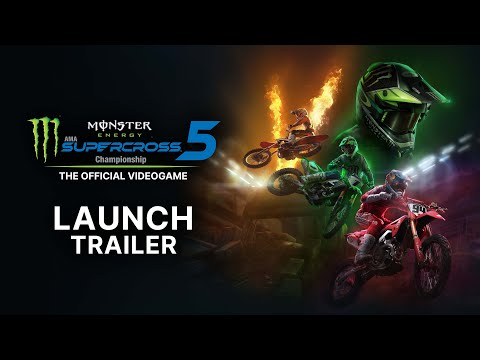