An orthopedic spine surgeon and a mechanical engineer who used to work for Lockheed Martin joined forces and have developed what they describe as the world’s first self-driving ski lift vehicle.
6 photos

Skiing is definitely fun, but only in one direction, and that’s downhill. But how cool would it be to have an autonomous vehicle that picks you up at the base of the mountain and drives you by itself all the way to the top, giving you access to the best backcountry powder ski areas? You then get out of the vehicle and start your descent. The ski lift vehicle does the same thing once you give it that command and will meet you again at the bottom to take you back up for another lap. You no longer have to rely on the traditional ski-lift infrastructure offered by ski resorts, nor do you have to get exhausted climbing the hill yourself.

Well, you guessed it: the two people mentioned above did just that, and their brainchild is called dolaGon. It was created by surgeon Dr. Seth Neubardt and engineer Logan Banning.

Based on a Polaris Ranger UTV (utility task vehicle), the dolaGon is much smarter and packed with sensors. It was also equipped with tracks to handle the snow easier and features LiDAR (light detection and ranging) for collision avoidance and an advanced GPS to keep it on the right path. The vehicle knows exactly how to follow a specific route up and down. Its developers have electronic triggers they carry with them, which can transmit over a range of one mile so that they can communicate with the dolaGon and make sure it stays safe, as explained by Neubardt and reported by Steamboat Pilot.

Unfortunately, the two developers are very skimpy with details, offering no specs or pricing info on the dolaGon. All we know for now is that the version you see in action in the video below this article is not the first prototype (the idea was first introduced in 2018) and has been consistently tested and demonstrated this winter, especially in Steamboat Springs, Colorado.

Neubardt and Banning stated they are taking their time with launching their product, but they hope that’s going to happen by next winter. Their plan is to offer the dolaGon more as a service business rather than a purchasable item. The two are also considering making an electric version of the dolaGon. 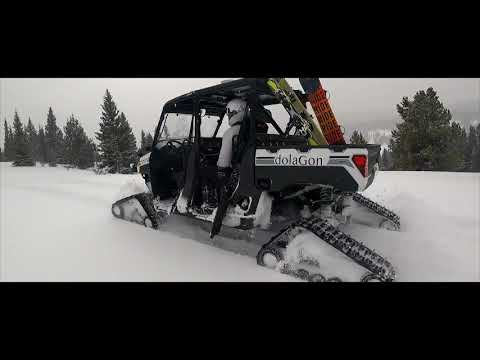