3 Lancia Delta Integrale Gets the Revival It Deserves, But Only in Digital Form

4 Lancia Delta Digitally Returns as an SUV, But Don’t Get Your Hopes Up

Modernized Lancia Delta S4 Is a 1,000 HP Dream of a Rally Car

For many car enthusiasts, Group B rally cars are the pinnacle of racing. Dangerous to the bone, Group B cars were not around for that long, but managed to create a fanbase so strong that they are still around, 35 years after the class was pulled from the calendar by the Federation Internationale de l'Automobile (FIA).
11 photos

All the big names of the 1980s took part with insane builds in the series, including Audi, Ford, Peugeot, and the now unrecognizable Lancia. For the Italians, Group B was just another competition where incredible machines like the Stratos or Delta S4 could show their racing prowess.

Sadly, Lancia is presently only a shadow of its former self. It makes only one model, one that, strangely for a carmaker with such an incredible racing heritage, is marketed as a fashion city car.

Knowing the brand’s past history, many have tried to revive the cars of old, either digitally, or in real life. The example we have here, called simply Delta, is a virtual modernization of the S4 that made quite the impression during the 1985 and 1986 World Rally Championship.

The rendering, created by Dmitry Mazurkevich, uses the S4 chassis, engine, and transmission as a starting point. It was envisioned with a “steel tubular space frame” and rocks a custom body kit with detachable Kevlar elements.

The midship Abarth engine has been envisioned with an unspecified combination between a supercharger and a turbocharger that could get the power levels all the way up to 1,000 hp, more than double the 483 hp the original was capable of.

The engine spins Integrale Gravel wheels wrapped in Pirelli P Zero Trofeo tires. Behind the wheels one can find long travel suspension and Brembo brakes. The car relies on a suite of sensors that can detect the road ahead and adjust the suspension, steering and whatnot to get the car ready for what’s coming its way.

Again, this is yet another of the many imagined Lancia Deltas, but if you ask us, it is one of the most complete ones, given how it’s not only a visual dream, but also a mechanical wonder as wel. You can have a look at the thing's entire specs at this link. 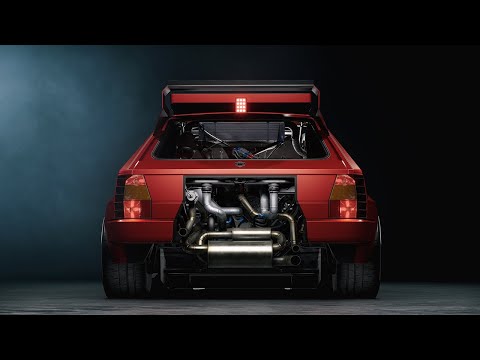